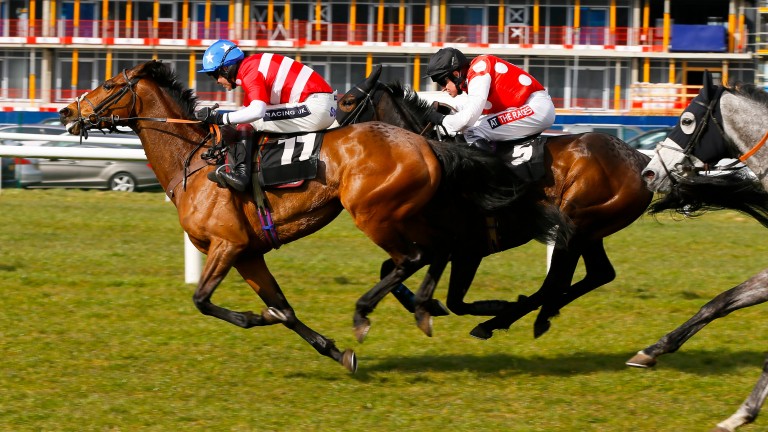 Briery Queen, awarded one valuable mares' handicap at Newbury in March on a disqualification, bids to land another one when she takes on a strong field fresh from a summer break.

The seven-year-old was hampered after the last and beaten a nose by Lady Of Lamanver at Newbury, having earlier won twice at Doncaster, and improvement will be needed if she is to overcome a 7lb higher mark. However, Noel Williams suspects that she has done so, and he is delighted to have acquired the services of Barry Geraghty once again.

The colours have already been carried to success this week by the Henry Daly-trained Briery Belle, who beat Debdebdeb in a similar race to this here in April, and took a Listed novice chase at Warwick on Thursday.

On Demand is much improved since being allowed to stride along and she is likely to have plenty of use made of her once again under her light weight.

Unusually, Dalmatia is the only Irish-trained runner on today's card.

Paul Nicholls, trainer of Jessber's Dream
It would need to rain all day for her to have a chance, but she ran well last time when 3m was too far and I'd said before that she would need the run. This ought to be much more suitable.

Alan King, trainer of Midnight Tour and Mia's Storm
Midnight Tour would have run at Ludlow on Monday but that was off. She's gone up 11lb for her Hereford win but she's a decent mare. Mia's Storm travelled well into the straight at Ascot last month but then got tired between the last two flights, so I'd hope she will have come on for that. She schooled over fences on Monday and could go chasing soon, but one step at a time.

Malcolm Jefferson, trainer of Card Game
You can ignore her last run over two miles at Wetherby as it was in Listed company which was too strong for her. We are hoping she will be suited by going back in a handicap.

Warren Greatrex, trainer of Hannah’s Princess
She's a nice mare. I like her a lot. She runs well fresh and won't mind the ground. I guess she ticks a lot of boxes. It will be good to get her back on the track.

Noel Williams, trainer of Briery Queen
She had a great novice season and, when I spotted this race, it looked an obvious place to start her off again. She'll probably improve a touch for the run, but I think that she has come on again and she's looking great, especially for this time of year. Barry [Geraghty] rode her in the mares' final and got a great tune out of her.

Richard Newland, trainer of Run Ructions Run
She's a super mare but it could well be that she needs a touch more juice in the ground over this trip. We are going to breed from her next year and hopefully she will bring home some prize-money.

Nigel Twiston-Davies, trainer of Kilronan High
She's back over hurdles because there's nothing suitable over fences. She's done well and there's no reason she shouldn't be thereabouts.

Eddie Harty, trainer of Dalmatia
She is a few pounds higher in England and will be stepping up in distance but, if she can reproduce her Punchestown performance, she should be in the mix. She can be quite keen and it is important to get her to settle.

Colin Tizzard, trainer of On Demand
We were hoping she'd get into the handicap proper, but she is 4lb out so we're using Charlie Deutsch's claim. Obviously she's got a low weight and likes to make the running, so that's how we'll ride her.