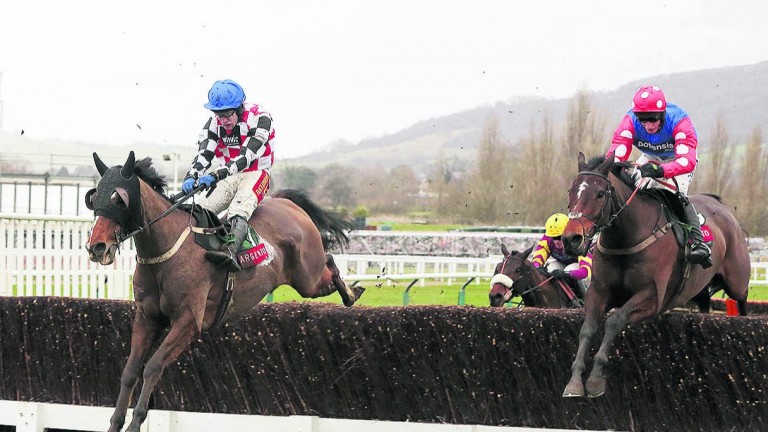 The Giant Bolster, who competed at a remarkable seven Cheltenham Festivals in a row and finished in the frame in three Gold Cups, has been retired, trainer David Bridgwater announced on Thursday.

The 11-year-old attracted a big following through his performances in the Gold Cup, which included a second to Synchronised in 2012, a fourth behind Bobs Worth in 2013 and a close-up third to Lord Windermere in 2014.

"He was fantastic," said Bridgwater. "He ran at seven festivals and finished second, third and fourth in three Gold Cups – with luck on our side he could have won two of them. He also won on festival trials day at Cheltenham three times. He was a wonderful horse.

"He was an old character and could be lazy but had he tried 100 per cent every time he ran he never would have run at seven Cheltenham Festivals. He saved a lot for himself – which is a credit to his ability. He was bred to win a German Derby and it just goes to show they come in all shapes and sizes!"

Reflecting on The Giant Bolster's two placed efforts in the Gold Cup, rider Tom Scudamore said: "He was three lengths away from being remembered as a great horse; he was very underrated.

"To run so many times at the Cheltenham Festival is a great credit to the horse, Bridgy and Simon [Hunt, owner]. He was a pleasure to be associated with."

The Giant Bolster won five times and earned connections more than £370,000 during his lengthy career, but Bridgwater could not pick out a particular highlight.

"We knew he was good from the day we had him so every time he ran was a fantastic occasion," said the trainer.

Regarding the decision to retire his flagship horse, Bridgwater explained: "The writing had been on the wall for 18 months really. It's sad to see it come to an end but everything good has to come to an end at some point. He's been a blessed horse all his life and will have a happy retirement."

Hunt indicated The Giant Bolster's retirement will be an active one through the Retraining of Racehorses programme.

"He'll be doing a mix of dressage, showjumping and cross-country and we'll see what he likes," the owner said.

"It will be great for the Retraining of Racehorses scheme to have such a high-profile horse. I've been completely overwhelmed by all the messages I've received – he was the people's champion.

"He was a bit quirky when he was younger but you would have him in your living room now."

Paddy Power offer 33-1 that a Hollywood movie is made about The Giant Bolster.

FIRST PUBLISHED 1:52PM, NOV 3 2016
He ran at seven festivals and finished second, third and fourth in three Gold Cups - with luck on our side he could have won two of them