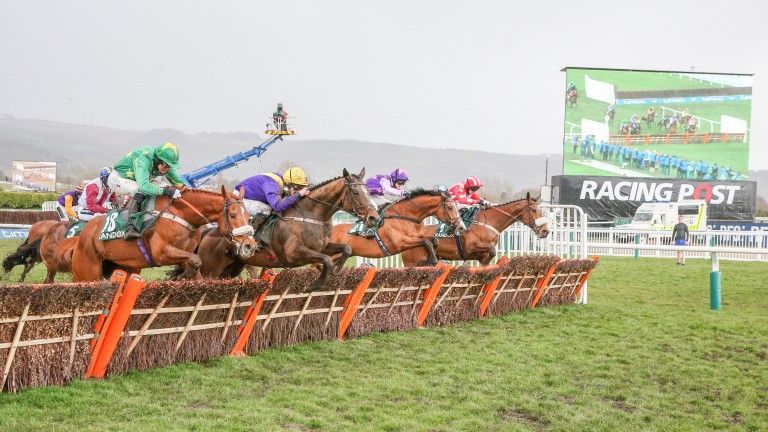 It was a long way from being the most popular of winners with punters, but only the hardest of hearts could fail to be moved by the sight of Harry Skelton pulling up alongside his partner Bridget Andrews for a congratulatory hug and a kiss after she had enjoyed a first festival success on unconsidered 33-1 chance Mohaayed.

Skelton's brother, trainer Dan, had been really sweet on Mohaayed's chance in the Randox Health County Hurdle until the rain came, but was so concerned about conditions he nearly did not run him.

But Andrews, whose sister Gina won last year's Kim Muir on Domesday Book, enjoyed a great spin towards the head of affairs on the one-time Irish 2,000 Guineas sixth, who challenged going to the last and stayed on up the hill to beat fellow outsider Remiluc by two and three-quarter lengths, with Whiskey Sour leading home the fancied runners in third.

Andrews could scarcely believe her good fortune and admitted: "I'm in shock. We wrote him off and Harry went against him with Spiritofthegames [dead-heated for fifth], but because of the ground a lot of people were taking their time and I ended up real handy.

"I gave him plenty of light and tried to find the best ground, and to be honest they gave us a soft lead up front as we ended up going quite slow. He jumped and travelled and going down the hill Harry shouted, 'Steady Bridge' because I was going so well. I didn't want to press on too soon.

"I was just waiting for them to swallow me up but he just kept on going – bless him." 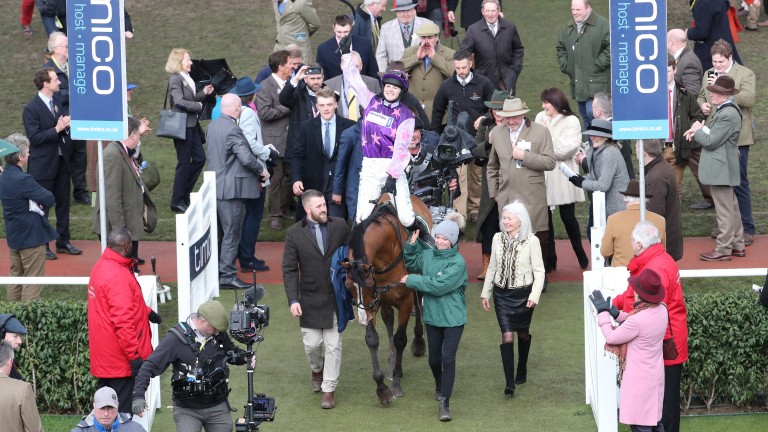 Bridget Andrews punches the air in celebration as she enters the winner's enclosure on Mohaayed, flanked by connections
GROSSICK RACING 07710461723
Andrews, who for luck hung her kit on the peg where her sister signed her name 12 months ago, is from a family steeped in racing as her father Simon won the Aintree Fox Hunters' in 1988 on Newnham, her mother also rode winners, and brother Jack had a ride later on this card in the Foxhunter.

However, it was a brave decision to turn conditional, albeit one that paid off with three rides on the most prestigious card of the season.

She said: "When I started riding I always said I'd never go conditional because it's so hard, but when Dan offered me the job I couldn't turn it down. I might be biased, but I think I have the best conditionals job in the country. I couldn't be happier."

The trainer, who enjoyed his first festival win in the same race with Superb Story in 2016, said: "I really fancied the horse three weeks ago, but it kept on raining and it's down to his owner June [Watts] that he ran. If I'd had my way I'd probably have pulled him out.

"There was never any question though of Bridget not riding him if Harry chose the other horse. It was just meant to be."

Remiluc has done Chris Gordon proud since he was bought from Paul Nicholls and had enjoyed his own Cheltenham win in January. He was still pricking his ears up the run-in, but jockey Harry Reed said: "He just does that. I don't think he's holding anything back."

Gordon, who was "a bit insulted by the 50-1", might now return Remiluc to fences to exploit a more lenient mark.

He said: "I might just go chasing with him. He finished second behind Saint Calvados on that horse's first start over fences and we're rated only 127 [compared to 144 over hurdles]."