Brian Meehan believes Mutarakez has 'great chance' on the snow 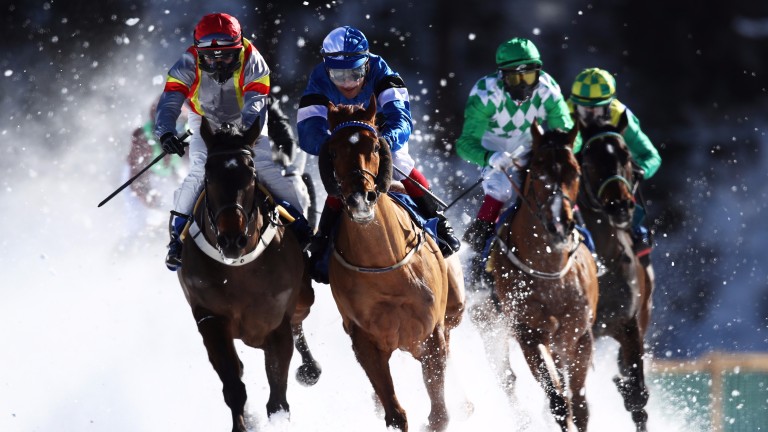 Racing on the snow at St Moritz always produces some spectacular shots
Julian Finney
1 of 1
By David Conolly-Smith 9:17AM, FEB 27 2017

Switzerland's richest race, the Grosser Preis von St Moritz - run on the frozen lake at the luxurious winter sports resort on Sunday, has attracted a maximum field of sixteen runners, including four trained in Britain, five in Germany and one from France.

Last year the race had to be run over the wrong distance because of a thaw but, following a very cold spell in January, conditions are much better for the 2017 renewal.

Meehan is in bullish mood about the chances of Mutarakez and said: "He's travelled well and is in good form. I think he's got a great chance. He's one of the highest rated horses in the race and he's enjoyed the track the last two mornings."

Best saddled Berrahri to win on the White Turf on Friday and on his chances of adding further success he said: "Eddystone Rock's been disappointing since he's been out here and we've had him checked by the vets. He appears to be all okay and he appears to be a lot brighter in himself so I'm hoping we'll see a better effort, but on what he's done since he got here he needs to step up.

"We also have Gung Ho Jack on the undercard doesn't seem to be quite getting home, it just takes that little bit more getting, and it's a hotter race than he's been running in. We've had our winner, so anything more would be the icing on the cake."

Osborne, Best and Tracey Collins all have runners on the undercard.

FIRST PUBLISHED 2:41PM, FEB 25 2017
I think he's got a great chance. He's one of the highest rated horses in the race and he's enjoyed the track the last two mornings