Talk of the Tracks AYR

Brennan trumps his rivals with hat-trick 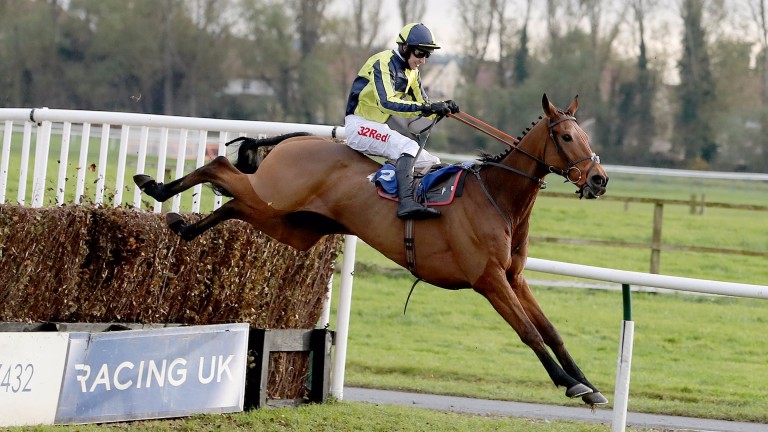 Viva Steve, under Paddy Brennan, wins on his first start for Fergal O'Brien and Paul and Clare Rooney
John Grossick
1 of 1
By Ben Hutton 5:32PM, NOV 9 2016

As well as it being an excellent day for a local hotelier, things could not have gone any better for Paddy Brennan, who won on all three of his rides.

Half an hour up the road from Trump Turnberry, the golf resort owned by the US President-elect, Brennan was completing a treble that leaves him only four winners away from having ridden 1,000 over jumps in Britain.

His victories in the first two races were for Fergal O'Brien, the four-year-old filly Miss Maiden Over taking the maiden hurdle and Viva Steve making all in the 3m½f handicap chase.

Viva Steve was having his first start for O'Brien and for owners Paul and Clare Rooney, having been bought for £67,000 at Ascot in May.

Jason Maguire, racing manager to the Rooneys, said: "Fergal's found a good opportunity for him and he's obviously improved a bit. He's a grand horse. He galloped away and jumped well.

"I'm not sure where he'll go next, I'll leave that to Fergal, but maybe something like the Becher or Welsh National."

There is National potential in Viva Steve's form, as he was second for Mick Channon behind subsequent Grand National runner-up The Last Samuri, also owned by the Rooneys, at Kempton last December.

The seven-year-old is trained by her father Nick, who said: "She's quite badly concussed and I think she's broken her collarbone, but they're fully checking her out in hospital. It's the last thing she needs at this time of year."

The trainer saddled a double at this meeting last season and was on the scoresheet again with Titian Bay, who scored easily on his chasing debut in the 2m4½f novice handicap.

Alexander said of the seven-year-old, who was ridden by Brian Hughes: "That was what I was hoping to see because he's very lowly rated and he's not a bad horse. He's huge -–he's 17 hands plus – and he never really took to hurdling."

Rain suits course specialist Lochnell
The political forecasters may have got things badly wrong in the US but their weather-predicting counterparts were spot on overnight and the rain that turned the ground soft helped Lochnell bag her third course win in the 3m½f handicap hurdle.

The Ian Duncan-trained mare, owned by the racecourse owners Alan and Barry MacDonald, travelled smoothly under Brennan to win by three and three-quarter lengths and complete the jockey's perfect afternoon.

Duncan said: "The rain that came suited us to a T because she wants it soft. She stays all day and she's a good, sharp jumper. Paddy gave her a terrific ride. Eventually we'll go chasing."

George defies lengthy absence
Hi George, who beat none other than Holywell over fences in November 2013, defied an absence of nearly two years to land the 2m5f½f handicap hurdle for Malcolm Jefferson and the Forever Young Racing Partnership, completing a double for rider Brian Hughes.

Thought for the day
Paddy Brennan showed his class when winning on all three rides, particularly his patient performance on Lochnell which moves him on to 996 jumps winners in Britain.