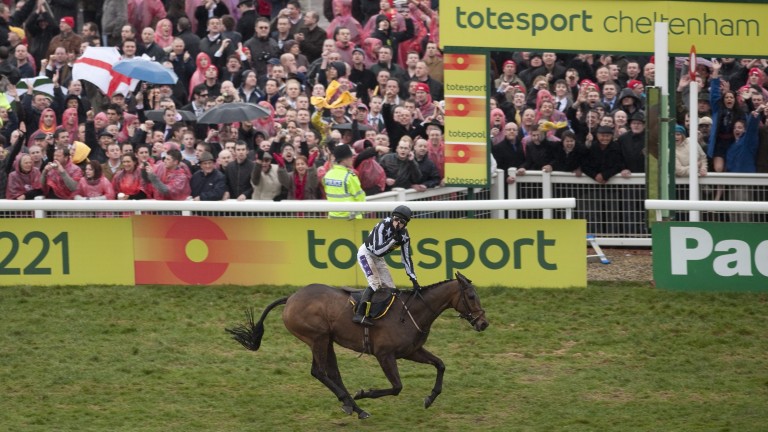 Paddy Brennan celebrated a landmark success on Wednesday as victory for Colin's Sister in the 2m5f mares' novices hurdle brought up the rider's 1,000th jumps winner in Britain and Ireland.

Brennan said: "It's an amazing feeling. My ambition ever since I came to England was to ride 1,000 winners and win the Gold Cup. It's been unbelievable and there are so many people to thank.

"I count myself very lucky. I never thought I was that blessed with talent – I always worked extremely hard. I'd love to think I'm an example to other young jockeys coming through, that you might not be at the very top but anything is possible."

Brennan takes the prize ride on Cue Card in Saturday's Betfair Chase at Haydock but first he intends celebrating his significant achievement.

"I'm looking forward to the weekend but now's the time to celebrate and this is a landmark I'm very proud of," he added.

Brennan had his first winner over jumps when steering Classic Grounds to victory in a maiden hurdle at Gowran Park in September 2000.

He has since captured some of racing's biggest prizes, including contests such as the World Hurdle, King George VI Chase and, notably, the Cheltenham Gold Cup.

The two horses Brennan is arguably most closely associated with are Imperial Commander and Cue Card, who between them have provided him with six Grade 1 wins.

Imperial Commander memorably won the Cheltenham Gold Cup during a golden era of steeplechasing in 2010, while Cue Card racked up a Grade 1 hat-trick last season.

Brennan's most successful season in numerical terms was during 2007-08 when, principally riding for Nigel Twiston-Davies after a split from Howard Johnson, he racked up 104 winners. It is the only time he has passed the century mark in a season.

Brennan has joined a select list of jockeys who have registered 1,000 winners over jumps. Richard Johnson, Ruby Walsh, Barry Geraghty, Davy Russell, Noel Fehily and Tom Scudamore are the only other active jump jockeys who have passed the landmark.

Graham Lee and Timmy Murphy have also registered in excess of 1,000 winners over jumps but now ride predominantly on the Flat.

Stan Mellor in 1971 was the first jockey to reach the milestone and Brennan is the 23rd in total.