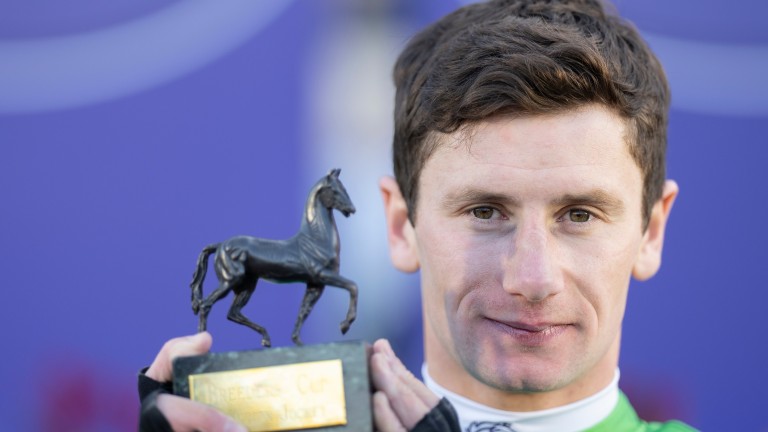 Just over two hours after Loves Only You sealed a landmark first Breeders' Cup victory for Japan in the Filly & Mare Turf, stablemate and 50-1 outsider Marche Lorriane followed suit in the Distaff under Oisin Murphy.

Murphy made his move turning into the straight and Marche Lorraine just held on in a photo-finish from runner-up Dunbar Road.

Marche Lorraine and Loves Only You are trained by Yoshito Yahagi, who starred on a memorable night for the racing-mad nation.

Murphy, celebrating his first Breeders' Cup winner, said: "I wasn't quite sure if we had got up but this is a dream come true to win on a Japanese horse on the biggest stage in the world.

"I grew up watching these races as a child and it's the highlight of the autumn after the Arc. Mr Yahagi has had two winners today and it's an unbelievable training performance."

There was a similarly thrilling finish to the Filly & Mare Turf, with Loves Only You staying on powerfully to deny runner-up My Sister Nat and War Like Goddess.

War Like Goddess had made a big move on the outside on the turn into the home straight, but could not quite last home, headed by My Sister Nat inside the final furlong before Loves Only You trumped both rivals in the closing strides under Yuga Kawada.

Prince of Wales's Stakes winner Love was not beaten far in fourth, while last year's winner Audarya was short of room turning in and could not make an impact in a never-nearer fifth.

Japan had come closest to victory at the meeting in this race in 2010 with fourth-placed Red Desire, with no runner finishing in the placings prior to this year.

Reacting to Love's creditable run, Aidan O'Brien said: "Ryan [Moore] said it got a little bit messy. When he went to move up a little bit the other horse came with him. He couldn’t get across and he got pushed very wide leaving the home straight the first time around.

"She just didn’t get the run of the race. If the lads agree to it, I think the plan is to go to Hong Kong.”

Connections of the winner indicated she could also join Love inHong Kong next month. 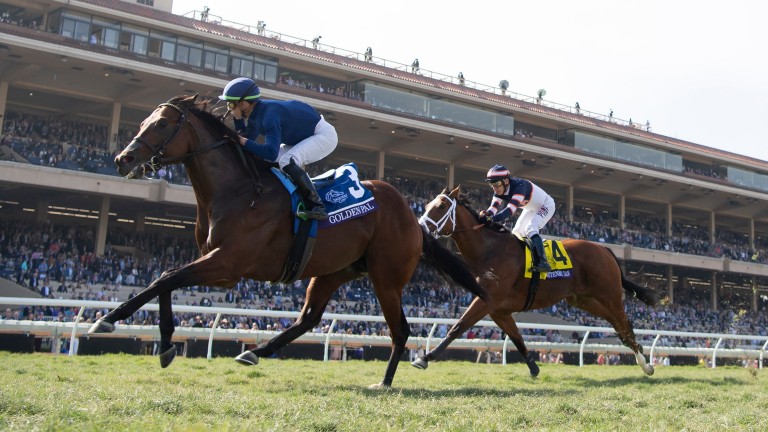 Wesley Ward hailed Turf Sprint winner Golden Pal as the best he has been associated with as the colt blitzed his rivals from the front under Irad Ortiz.

The three-year-old colt, owned by Coolmore and Westerberg, showed blistering early speed and was not for catching, with Lieutenant Dan finishing second.

The Kevin Ryan-trained Emaraaty Ana, who finished in front of Golden Pal in the Nunthorpe at York, fared best of the British and Irish runners in fourth, narrowly in front of the Ado McGuinness-trained A Case Of You.

Ward, celebrating his first Turf Sprint success, said: "He's the best I've trained. He's just so fast and blessed with so much natural speed and ability. We're lucky to have him."

It must have been a thrill for Ortiz, setting the fierce fractions and repelling all challengers in the home straight for an ultimately straightforward win.

Ortiz said: “He always breaks fast and I had to get him out quick today. He broke very quickly. He’s a special horse and Wesley has always loved him.

"It means a lot to win these big races and thank you to Coolmore for the opportunity."

Golden Pal registered back-to-back Breeders' Cup victories, having won the Juvenile Turf Sprint at Keeneland last year, and he may well be seen by British racegoers again next year with part-owner Michael Tabor suggesting Royal Ascot will be on the top sprinter's agenda.

Last year's winner Glass Slippers was ridden early and never troubled the principals on what proved her final start, with the three-time top-level winner heading to stud.

Ryan said: "Glass Slippers was flat out all the way and never got a chance to fill up. She’s been a great mare for us and she’ll be off to the paddocks now.

“Emaraaty Ana ran a great race. They just kept going in front but he’s run his heart out and I’m delighted with him. Golden Pal showed unbelievable speed from the gates and he kept going all the way to the line."

McGuinness said A Case Of You is likely to head for the Hong Kong Sprint at Sha Tin in December next.

Life Is Good secured a quickfire double for Ortiz with a devastating all-the-way success in the following Dirt Mile.

Injury knocked the star colt off the Triple Crown trail earlier in the year, having beaten Breeders’ Cup Classic runner Medina Spirit on his first two starts when trained by Bob Baffert.

Switched to trainer Todd Pletcher, Life Is Good followed up success in a Grade 2 at Belmont last time with a stunning five-and-three-quarter length win over Ginobili as the 7-10 favourite.

Gamine was a beaten 2-5 favourite when third to Ce Ce in the Filly & Mare Sprint and there was more pain for favourite backers in the Sprint as 1-2 shot Jackie’s Warrior could only manage sixth.

Aloha West, trained by Wayne Catalano, finished with a flourish to deny Dr. Schivel, who traded at 1.01 for nearly £2,000 on the Betfair Exchange, in a photo-finish to the 6f Grade 1. The winner was partnered by Ortiz’s brother Jose.

The winning rider said: “It was a great finish and I knew I was rolling on the outside. I thought we had got up but I wasn’t one hundred per cent sure. When he was in the clear, he flew home.”

Bob Baffert on target at the Breeders' Cup amid doping controversies

FIRST PUBLISHED 7:49PM, NOV 6 2021
This is a dream come true to win on a Japanese horse on the biggest stage in the world