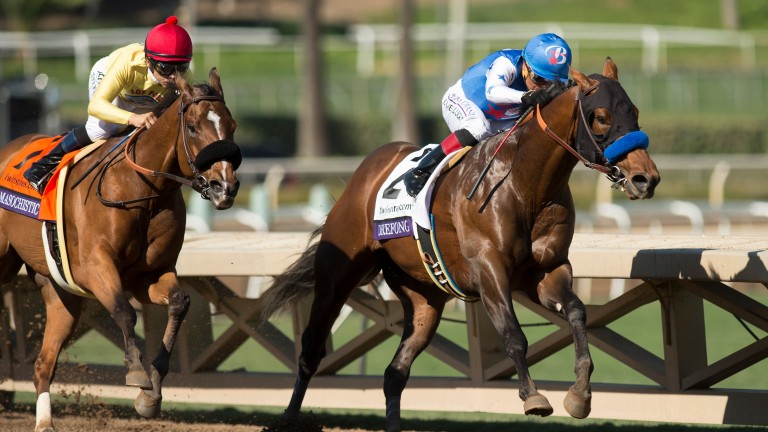 The six-year-old tested positive for the steroid stanozolol – better known by its former trade name Winstrol – in both blood and urine post-race samples. Although the steroid is legal to use in California, it must have cleared a horse's system by raceday.

As a result of the positive test, Masochistic will be placed last behind Drefong and his connections forfeit $255,000 in prize-money, while trainer Ron Ellis is set to face further punishment.

The trainer explained his use of stanolozol on Masochistic two days after the horse had won a Grade 2 event at Del Mar.

"It was done therapeutically because he's a small horse and we've had trouble keeping weight on him," Ellis told the Daily Racing Form.

"It wasn't hidden. No sinister purpose was involved as the injection was given outside of the recommended 60-day guidelines and registered with the state as required."

According to the Form, only a minuscule amount of the substance was found in Masochistic's sample.

"The amount is very, very small, but it doesn't matter. Just having a presence is enough," added Ellis.

"I apologise to the Breeders Cup and the racing industry for this unfortunate event. I understand and respect the ramifications of CHRB [California Horse Racing Board] regulations and trust I will be treated fairly under the circumstances."

Masochistic's disqualification will be ratified at a CHRB meeting on December 30.

"It's less than a fifth of a nanogram," said Ellis. "I don't dispute the science. I dispute testing to these levels on drugs that are legal to use."

FIRST PUBLISHED 12:56PM, DEC 20 2016
No sinister purpose was involved as the injection was given outside of the recommended 60-day guidelines and registered with the state as required