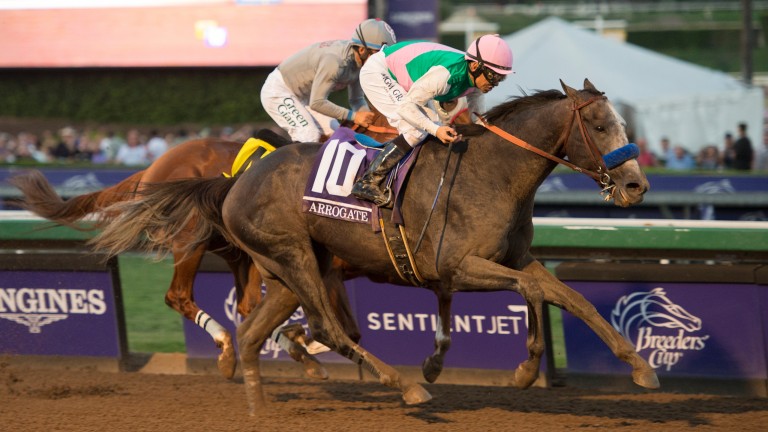 Arrogate: cutting back a furlong for Pegasus World Cup as he bids to confirm Breeders' Cup placings with arch-rival California Chrome
Edward Whitaker
1 of 1
By Nicholas Godfrey 6:36PM, DEC 31 2016

The Juddmonte superstar has his prep for his Pegasus World Cup rematch with California Chrome in the San Pasqual Stakes, a potential banana skin of a Grade 2 contest four weeks before what will be the world's richest race at Gulfstream Park on January 28.

Not only is the distance of an extended mile on the short side for Arrogate, but his four rivals all have graded-stakes victories to their name, including Grade 1 scorer Midnight Storm.

Bob Baffert, who gave Arrogate the go-ahead to run after a fast workout at Santa Anita on Tuesday, admitted to concerns about forecast rain disrupting his training regimen. "He went really well Tuesday, really easy," he said. "The rain has me a little bit worried, but I didn’t want to be waiting too long to put a race into him.

“The San Pasqual will be his hard work. From here on out with the rain, things are going to be spotty, so you’ve got to go. I want to get a race into him, but it’s not going to be easy. There are some nice horses in there."

Even so, after five consecutive victories including a blistering Travers Stakes before the Classic, Arrogate will justifiably start long odds-on for the $200,000 event, won 12 months ago by his arch-rival California Chrome.

Chief opponent is likely to be Midnight Storm, who is better known as a turf performer. He won the Grade 1 Shoemaker Mile here in June and was third in the Breeders' Cup Mile before switching to the main dirt track at Del Mar for a near-eight-length score in Grade 3 company.