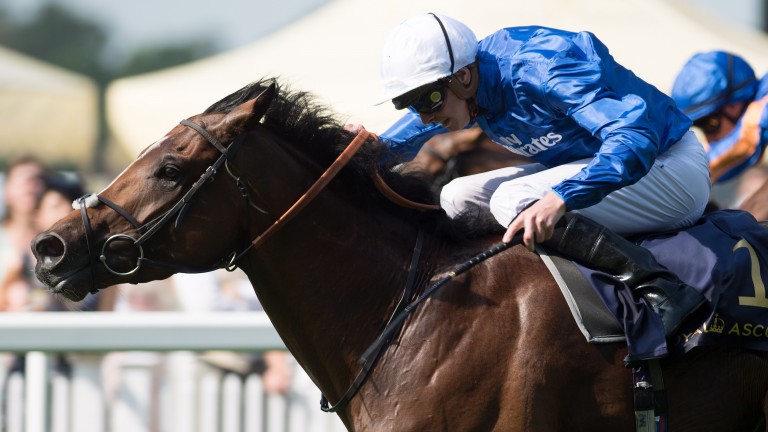 Barney Roy showed his "courage and ability" to capture his second Group 1 of the year with a hard-fought victory in the Grosser Dallmayr-Preis at Munich on Sunday.

Rain in south Germany had eased the going for the 1m2f contest and jockey William Buick believed the six-year-old was uncomfortable from a long way out, yet showed his quality to prevail by a neck from local contender Quest The Moon.

"It was a very tough race," Buick said. "To be honest with you I thought the German horses set a good standard and they're at home. When the rain came this morning we were a little concerned because all his best form is on fast ground.

"I thought he struggled on the ground from a long way out but his courage and his ability got him through. He's a high-class horse."

Barney Roy, sent off the even-money favourite, was slow from the gate and settled towards the rear as stablemate Spotify and Naida set a strong gallop in front.

Turning for home, the race opened up with Barney Roy making his challenge up the centre of the track as Quest The Moon and Durance battled it out in the lead, while the Joseph O’Brien-trained Patrick Sarsfield was also giving his all.

Despite not loving the underfoot conditions, Barney Roy stuck his neck out to pass and hold the persistent challenge of Quest The Moon, with Patrick Sarsfield a length and a quarter away in third.

Charlie Appleby admitted the race had not quite worked out as planned in the early stages, but was thrilled to have added another Group 1 to Barney Roy’s record after his success in the Jebel Hatta at Meydan in March.

Appleby said: "There was a strong pace from the start and it developed into two races really. We were a bit further back than ideal on this ground and the local horses ran very well as stamina came into play.

"I’d like to thank Munich for putting the race on and for the sponsors for backing the race. As we know its a difficult time for everyone, but to be able to come here and win a Group 1 for Godolphin, we're all delighted and we appreciate everyone's support."

Read more of our big-race reports:

FIRST PUBLISHED 3:58PM, JUL 26 2020
I thought he struggled on the ground from a long way out but his courage and his ability got him through

'It's an edge' - the home comfort giving Appleby an advantage over his rivals Improving Rebel's Romance claims German Group 1 for Appleby and Doyle Raise You poised for Kyprios clash after ready Irish St Leger Trial strike Coroebus 'the one to beat' - Appleby confident for Jacques le Marois run 'I'll be disappointed if he doesn't win' - which trainer is ultra-confident? Godolphin unlikely to have new horses trained in Ireland as UK takes priority