Rouget's Royal Ascot dilemma: how do you solve a problem like Brametot?

Scott Burton weighs up the options for the French Guineas winner 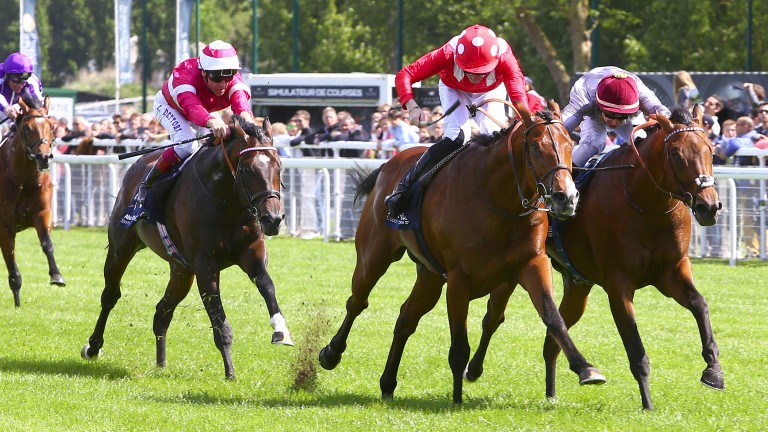 The second and final installment of the French Guineas meeting’s sojourn by the sea proved as thrilling as its predecessor, with Deauville producing three genuine Group 1s, a sprinting performance out of the top drawer and some sturdy signs planted on the roads to Epsom, Chantilly and Ascot.

Jean-Claude Rouget is more willing than most to offer journalists (and his owners) an initial plan in the moments immediately after victory. Not for the master of Pau the defensive deployment of phrases such as: "Let’s enjoy today first" or "we’ll see how they come out of the race and consult the programme book."

On Sunday afternoon Rouget expressed a pretty strong preference for the Prix du Jockey Club exactly three weeks later at Chantilly, rather than staying at a mile in the St James’s Palace Stakes at Ascot.

That would pitch Brametot into a mouthwatering matchup with Newmarket Guineas third Al Wukair, with Racing Post Ratings guru Sam Walker placing them within a pound of one another in the wake of the Poulains.

But a number of matters sow at least a seed of confusion in that initial plan and, whatever the final decision, the wishes of both sets of owners and the trainer will all go into the mix.

Rouget himself is never afraid of further reflection. Without that ability to re-examine his own prejudices, he would have one fewer Prix de Diane trophies on the sideboard, given his initial skepticism that Avenir Certain would stay the trip at Chantilly.

Mathieu Alex, director of co-owner Gerard Augustin-Normand’s Haras de la Cauviniere, said on Monday that both races were still on the table and that he "would not be afraid of staying at 1,600 metres [a mile]."

The case for the St James’s Palace Stakes

As of last week, Al Wukair’s owners Al Shaqab now own 50 per cent of Brametot. The not unfair question that Sheikh Joaan Al Thani might ask himself is: "Do I need to race my two best colts against each other at this stage of the season?"

Timing could also be an issue given Rouget’s often stated preference for avoiding running his best horses back after a three week gap. The trainer described Brametot on Sunday as "not the biggest," while the son of Rajsaman had to fight like a lion to get up in the shadow of the post.

The visual evidence was that Brametot had a hard enough race and Ascot would give him an extra two and a half weeks of recuperation.

And in case anyone doubts Brametot has the raw speed for the job, a time of 1.36.82 on soft ground would suggest otherwise.

The case for the Prix du Jockey Club

As Rouget said on Sunday, Brametot is bred to be a middle-distance performer rather than a miler, being out of a half-sister to Monsun. And his exaggerated habit of dropping himself out would surely be less fraught with danger over an extra two and a half furlongs.

Another consideration Rouget raised in the Deauville winner's enclosure was stepping up in trip sooner rather than later with a view to the Arc, a race which neither he nor co-owner Gerard Augustin-Normand have won, and one which Al Shaqab prize over any other.

In recent years Avenir Certain and La Cressonniere have approached the big day with a question mark over their stamina, and the fact Rouget even mentioned the Arc on Sunday is telling.

Going on from the Poule d’Essai to the Jockey Club 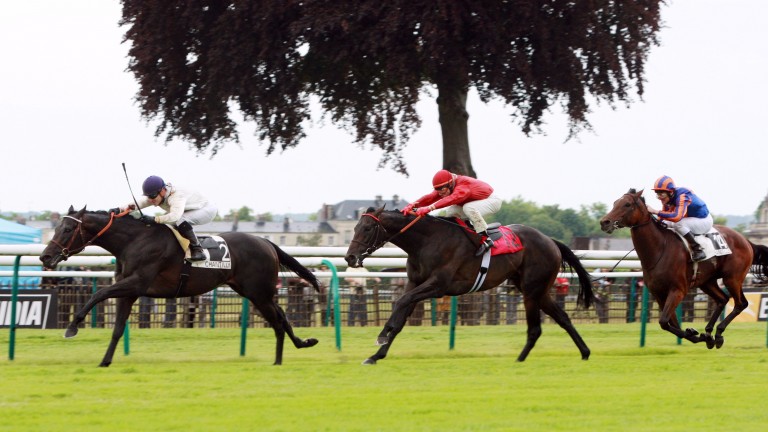 Le Havre (no 2) had a month to recover from his exertions in the Poule d'Essai des Poulains before winning the Prix du Jockey Club in 2009
Frank Sorge/Racingfotos.com

The French version of the 2,000 Guineas has produced five winners of the Jockey Club since the latter race was shortened to 1m2½f in 2005. A three-week gap is far from insurmountable, although Rouget’s only Jockey Club winner to come via the Poule d’Essai, Le Havre, enjoyed an extra week of recovery. The three most recent colts to succeed – all trained by Andre Fabre – won off a 21-day turnaround.

Were there any excuses for those in behind ?

Fabre showed daring in stepping Le Brivido up in trip and class, a move which so nearly paid off, with only the exceptional courage of Brametot denying him.

You would be hard pressed to say he didn’t stay given how far the pair drew clear of Rivet, although Deauville is a very easy mile.

Stablemate Inns Of Court ran a remarkable race in his own way, travelling well before finishing sixth despite his saddle slipping forward well before half way. Christophe Soumillon reported that the disappointing favourite, National Defense, didn’t take a breath throughout the whole race. 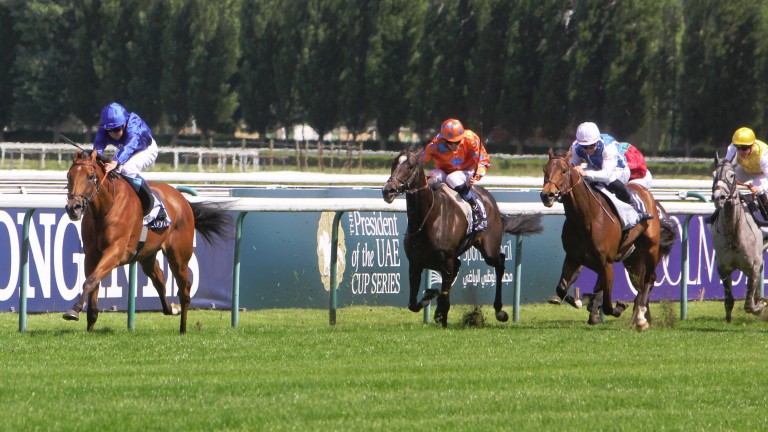 All four Group races over the weekend produced impressive winners and look sure to have a big bearing on their respective divisions going forward.

Sobetsu routed her rivals in a Prix Saint-Alary that looked high on quality beforehand and immediately sparked a flurry of quotes for the Oaks.

It is hard to argue that the Godolphin team haven’t made the right call in opting for the Prix de Diane Longines, the race for which the Saint-Alary is designed to serve as a deluxe trial.

Sobetsu has already beaten a lot of the best fillies in France over virtually the same trip as she will face at Chantilly. And while Charlie Appleby said on Sunday he would not be afraid of backing her up, Epsom would have come just 19 days on, whereas there is a full month between the two French races.

Sobetsu clearly enjoyed a bit of give underfoot, the chief reason that Godolphin offered for choosing Chantilly. It remains to be seen whether she will get her optimum conditions but she will be among the leading players in the Diane, a race which, it should not be forgotten, is worth considerably more in prize-money than the Oaks.

It is hard not to agree with my colleague Maddy Playle, speaking on the Racing Postcast review programme, when she argued the performance of the meeting was produced by Signs Of Blessing, who gave Profitable 11lb and a hiding in the Prix Saint-Georges.

I can claim no objectivity with Francois Rohaut’s six-year-old, who has been a favourite since winning the Criterium de Vitesse at Longchamp four years ago.

If Saturday didn’t convince you, what about his fast-finishing fifth – from an impossible wide draw – behind Aerovelocity and Lucky Bubbles in Hong Kong in December.

Ask yourself what price those two sprinters would be if they were heading to Ascot and you might conclude that Signs Of Blessing should be a fair bit shorter than the widely available 10-1 for the King’s Stand.

And finally Precieuse, who may have shocked pari-muteul punters in taking the Poule d’Essai des Pouliches at 28-1, but who won with authority.

Precieuse had never raced over further than six furlongs and looked to the casual observer as if she might have been switched to Plan B after finishing a distant second in the Prix Sigy to Commonwealth Cup-bound Fas, an Ascot contender whose claims can only have been strengthened.

But her astute trainer Fabrice Chappet showed maximum confidence in Precieuse on a track where speed remains the primary weapon.

And Olivier "Magic" Peslier’s charmed passage through the race was a sight to behold, as he tracked the leader on the standside of the field in almost glorious isolation.

Credit too goes to owner/breeders Brendan and Anne-Marie Hayes for sending Precieuse to Chappet, who observed after his first Group 1 win that: "You need the right horses, ones that are well bred. Having the right material is the basis of it all."

Where will the winner go ? 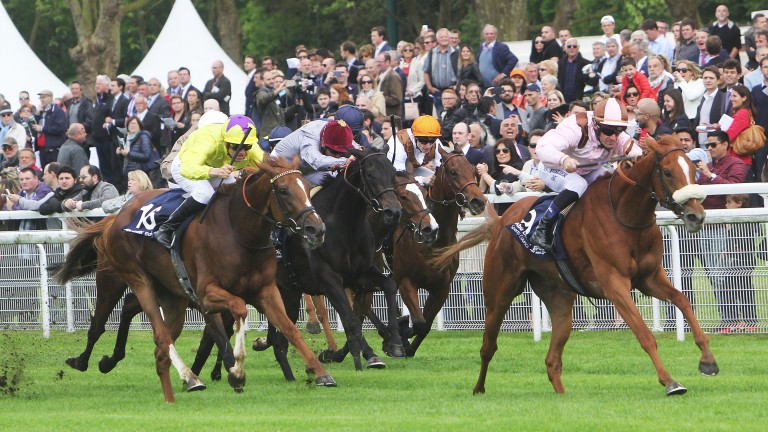 Precieuse needs to be supplemented for the Coronation Stakes, a move neither Chappet nor the owners would appear to be afraid of making. The filly is reported to have cleaned out her feed trough on returning to Chantilly and, given it is the last chance to race against her own age and sex over a mile, Ascot looks favourite at the moment. The alternative would be to give the daughter of Tamayuz a short break before returning to this course and distance for the Group 1 Prix Rothschild at the end of July.

FIRST PUBLISHED 6:53PM, MAY 16 2017
The performance of the meeting was produced by Signs Of Blessing, who gave Profitable 11lb and a hiding in the Prix Saint-Georges