Henderson one-two as Brain powers to glory under Mullins 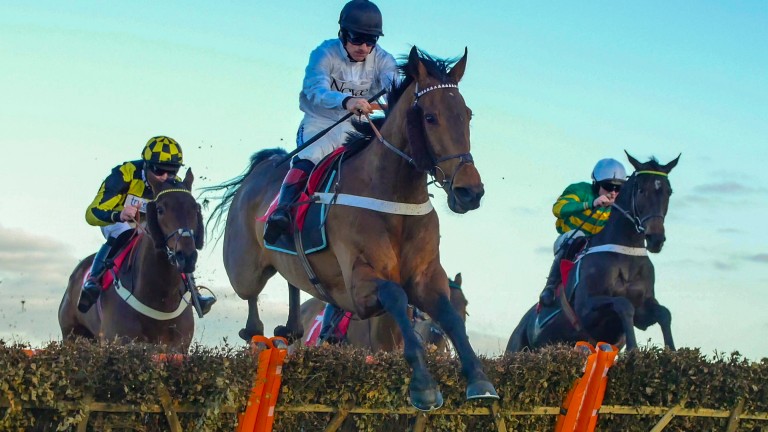 David Mullins, who enjoyed the biggest thrill in racing to land the Grand National on his first attempt in April, was celebrating another fruitful trip across the Irish Sea as the 20-year-old enjoyed a silk-smooth ride on Brain Power to win what is commonly perceived as one of the most competitive handicap hurdles of the season.

Indeed, last year the race formerly run as the Ladbroke but carrying the Wessex Youth Trust moniker for the first time on Saturday, ended in a dead-heat.

In contrast, Brain Power - under a hefty burden of 11st 11lb - was simply much superior to his rivals, bobbing out of the pea-souper with a commanding lead and sprinting five lengths clear of runner-up Consul De Thaix, like the winner trained by Nicky Henderson, for a bloodless success.

It was the second time Mullins had ridden the Michael Buckley-owned winner after finishing third together at the Punchestown festival in April, barely two weeks after winning the National on Rule The World, but it was a different Brain Power beneath him on this occasion.

“He’s grown up and matured a lot,” said Mullins, who had earlier been trusted with the ride on Long Walk regular Reve De Sivola.

“He’s a lovely horse now and bolted up. He missed one hurdle the whole way round and that got him to settle. Other than that there was no real doubt. He’s won like a fresh horse. He’s not the most efficient hurdler but he’s got class.”

Asked if he’d like to make his trips to Britain more regular, Mullins said: “Of course, for horses like that who wouldn’t? Michael Buckley has been great to bring me over and I’m very lucky to get rides like today.”

It was a fourth win in the race for Henderson, the only trainer to have won the Grade 3 more than twice, and while unsure what to make of 25-1 quotes for the Champion Hurdle, he predicted “fun times” ahead for the winner.

“He’s getting the idea of it and going the right way the whole of the time,” said Henderson. “You need a progressive horse to win and that’s what both mine are. We’ll have a bit of fun sitting down and thinking about what we’re going to do next – you’ve got the Newbury race to consider [Betfair Hurdle on February 11].

"Under that weight, and to get there travelling that well, it’s a very high-class performance.”

Buckley was full of praise for his trainer, although he had to rely on others when it came to the winning performance.

He said: “They tell me he won very well but it was a bit foggy! I think he’s had his time as a schoolboy and he’s growing up now thanks to his mighty trainer.”