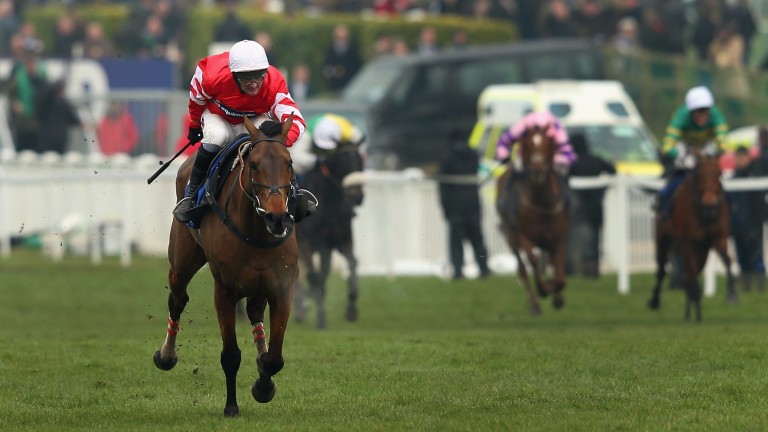 Coneygree: will be aimed at either Aintree or Punchestown this spring
Alex Livesey
1 of 1
By Tony McFadden 6:52PM, FEB 8 2017

Mark Bradstock has issued a positive bulletin about stable star Coneygree and hopes the 2015 Gold Cup winner will be able to compete at either Aintree or Punchestown this spring.

Coneygree became the first novice since Captain Christy in 1974 to win the Gold Cup, but he has been restricted to just two starts since that famous victory almost two years ago.

Having finished runner-up to Cue Card at Haydock in November, Coneygree was forced to miss the King George after suffering a "niggly setback", and was not entered in the Gold Cup as connections did not want to throw him into such a race on the back of an interrupted preparation.

However, Bradstock, speaking on At The Races, revealed that the intention is to run Coneygree again this season.

"He's in really good form," Bradstock said. "He's been swimming. He's going on a water treadmill and Sara [Bradstock's wife] rides him out as well.

"What we are trying to do is to make sure all his muscles don't completely fall to flab. What happened was not a total disaster and we're still keen to see if we can get him back for either Aintree or Punchestown.

"On a scale of one to ten, the setback was probably a four. It wasn't that drastic, but with these races like the Gold Cup you do need an almost clean run to them and he would have needed a prep run, which would have been either the Cotswold or the Denman, before the Gold Cup and that probably wasn't going to happen."