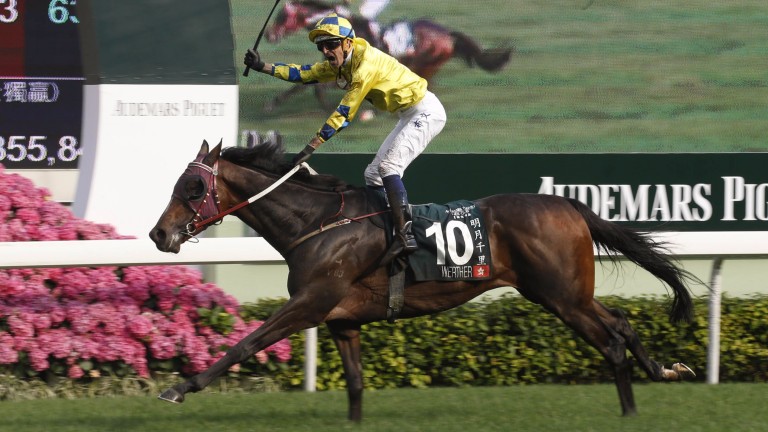 Twelve jockeys representing nine different countries faced off for the world's richest jockeys' challenge, but it descended into a mini Ashes series with Australia's Hugh Bowman eventually getting the better of a titanic tussle with Britain's Ryan Moore.

Bowman bounced out to an early lead with victory in the first leg aboard the John Size-trained 49-20 shot Premiere. Moore hit straight back, winning the second aboard the Anthony Millard-trained 33-20 favourite Giant Turtle to tie Bowman on 12 points.

Race three nearly settled things as Bowman came within a short-head of victory and, with Moore on the 19-10 favourite in the last he feared clipping heels could have cost him, especially as Moore dead-heated for third - meaning he picked up an additional two points instead of four.

With Keita Tosaki winning the final leg aboard the Size-trained Big Bang Bong and Bowman out of contention, Moore needed to finish third to secure a third win in the contest. He was fourth. Beaten a short-head. Getting the better of either of the two photo-finishes for the minor places in the final two races would have seen Moore victorious. But instead it was second for the second successive year.

Bowman, who picked up the HK$500,000 (£51,176.11) first prize for an event that has huge prize-money but no appearance fees, said: "I must admit there were an anxious few moments when I thought he had got up for third, but fortunately not and I hung on for the win. It means a great deal as I've had a lot of success here and it's a great competition. I think this is the world leader when it comes to these, along with the Shergar Cup and I'm glad I could make it third time lucky."

"We are delighted to celebrate the renewal of our partnership with the Hong Kong Jockey Club and would like to thank them for their collaboration in transforming these events into tremendous successes year after year," said Juan-Carlos Capelli, vice president of Longines and head of international marketing.

FIRST PUBLISHED 7:31PM, DEC 7 2016
I think this is the world leader when it comes to these, along with the Shergar Cup and I'm glad I could make it third time lucky