Boudot sails into history books and says he won't stop there 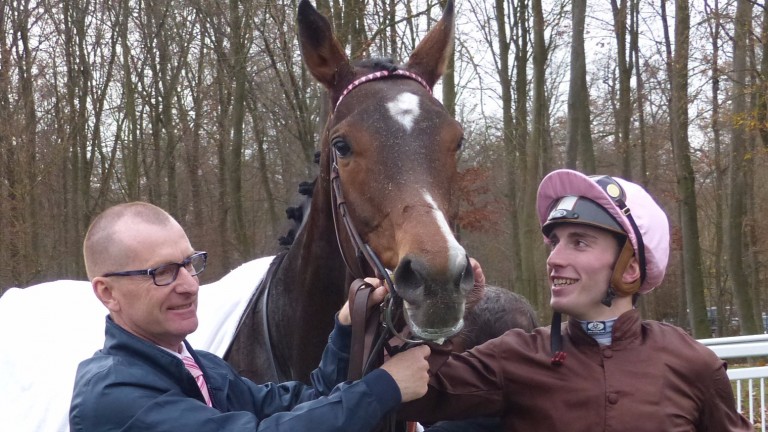 Pierre-Charles Boudot poses with his record-breaking Firouzeh, his 274th winner of the season
Racing Post
1 of 1
By Scott Burton 6:36PM, NOV 22 2016

There may have been some debate about exactly what the target was, but Pierre-Charles Boudot sailed into the record books as the most successful Flat jockey in a European calendar year with a four-timer at Chantilly on Tuesday.

In doing so he moved past the mark set by Arc-winning trainer Peter Schiergen, who during his previous career had ridden 273 winners in 1995.

Success aboard Ambivalence in the fillies' maiden made it 272 for the year in France for Boudot, which was enough for some French media to pop the champagne corks, given that two of Schiergen's winners had come outside Germany.

Boudot then booted home Firouzeh in the sixth race, wearing the colours of Elizabeth Fabre, the wife of his mentor and boss Andre.

With a victory of his own in Italy earlier in the month, Firouzeh's win took Boudot's tally to 274, and for good measure he went on to win the last two races on the card to end the day on 276.

"This is a consecration, the cherry on the top of a very successful year when we have achieved great things," said Boudot, who has travelled the highways and byways of France in search of the record this year.

"I've been really going for it all year and in October rode 38 winners, while this month it's up around 25. When I set out with this ambition I'd envisaged passing Peter Schiergen’s record a little later than this, but I've racked up plenty of winners in the last few days and this is really satisfying."

Boudot will attempt to push the new record way beyond its current resting place and, after a brief trip to partner Erupt in the Japan Cup at the weekend, he will resume his pursuit of winners in Europe next week.

"I'll keep going right until the end of the year and at the back of my mind I have the target of getting to 300 winners," said Boudot, who, hailing as he does from a jumping background, might be interested in the records of Sir Anthony McCoy.

Boudot was out of luck in the Listed Prix Herod, as were the Richard Fahey-trained Mums The Word and Re Run, who both finished out of the money.

Red Onion edged late-charging Charly Nova by a head to score for the father-and-son training team of Carlos and Yann Lerner.

FIRST PUBLISHED 5:15PM, NOV 22 2016
When I set out with this ambition I had the envisaged passing Peter Schiergen's record a little later than this but I have racked up plenty of winners in the last few days and and this is really satisfying