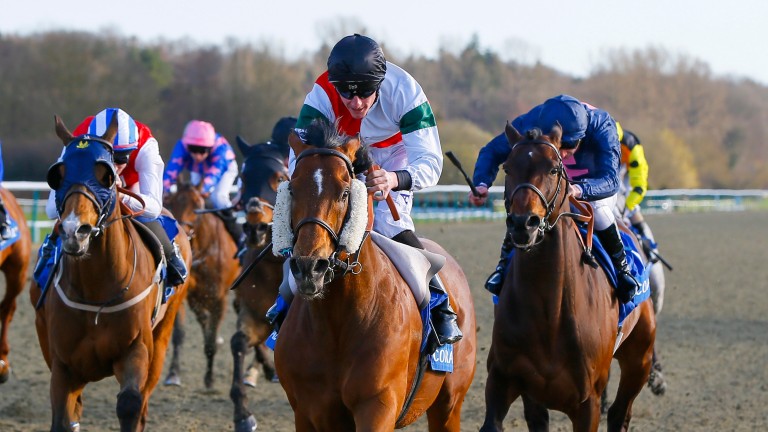 Grendisar, winner of the Listed Betway Winter Derby Trial Stakes (3.05) at Lingfield for the last two years, attempts to complete a magnificent hat-trick on Saturday, with trainer Marco Botti upbeat about the popular seven-year-old’s prospects.

“He has been so consistent throughout his career, and it’s lovely to have a horse like him to take part in the big races on sand over the winter.

“He looks well, and it would be wonderful if he could do the double [Winter Derby Trial and Winter Derby] again this year.”

Arab Spring, who has twice tackled Group 1 company, makes his first appearance since finishing fourth to Ventura Storm in the Premio Jockey Club at San Siro in October, while Decorated Knight is in action for the first time since landing a Leopardstown Group 3 in July.

Winner of seven of his 11 starts on an artificial surface, Pretend powered to a comfortable Kempton success last month, and Appleby believes he is “the one to beat”.

“He’ll love going back to Lingfield as he’s a past winner on All-Weather Championships finals day,” Appleby said.

“All the jockeys who have ridden him on turf say he struggles to get a proper grip on that surface, but he loves the all-weather, as his record shows. He is the horse they all have to beat.”

David Evans, who saddles Gracious John, one of the biggest dangers to Pretend, is concerned about the four-year-old’s wide draw in stall eight, but expects a decent performance nonetheless.

“We could have done with a better draw, but he has a good chance on form and should run well,” he said.

FIRST PUBLISHED 6:00PM, FEB 3 2017
He looks well, and it would be wonderful if he could do the double [Winter Derby Trial and Winter Derby] again this year

Appleby: Derby tilt for Pinatubo depends on Guineas performance Pinatubo steps up Guineas prep at Chelmsford as Palace Pier is ruled out 'Pinatubo should win the 2,000 Guineas but there are better bets' Best-backed Guineas hope since Frankel but punters still waiting to pounce Charlie Appleby runs us through the plans for his star-studded Godolphin string 'He's gone the right way' - bigger, stronger Pinatubo primed for Guineas bid