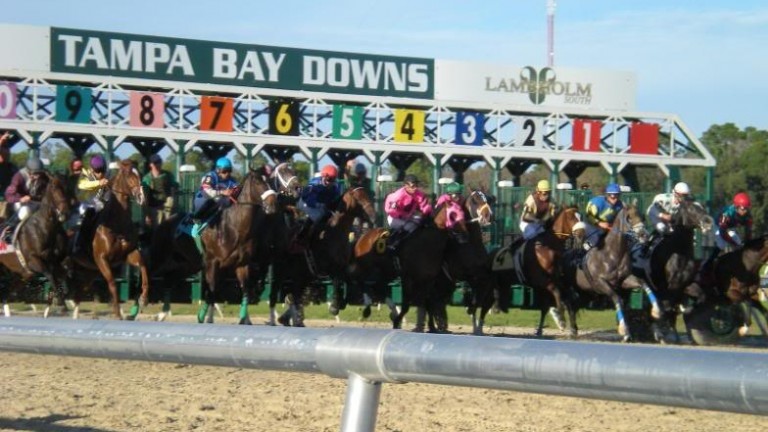 A good draw is not vital at Tampa Bay Downs, the only racecourse in west Florida
1 of 1
By Byron King/bloodhorse.com UPDATED 11:28AM, APR 24 2020

Florida regulators on Thursday approved a request from Tampa Bay Downs to extend its meet beyond its previously scheduled closing day of May 3, a decision that will continue the current meet until May 30.

Tampa, one of just a handful of racetracks across America still operating amid Covid-19, has been racing without spectators since March 18.

Like other southern ovals, Tampa draws horsemen from northern regions during the winter and early spring months before they leave as more locations open for late spring and summer racing. This year, with those tracks temporarily closed or delaying their stable openings, other stabling options are limited, if not absent.

Adrian Wall's US tips for Friday

"It was a pretty easy decision once we realised the horse inventory on the backside was going to remain fairly constant through the month of May, depending on what tracks open up north," said Peter Berube, the track's vice president and general manager. "If all of a sudden the horse population declines, we have the ability to go back to the state and drop these dates. But I don't anticipate that happening."

Kathleen O'Connell, a two-time leading trainer at Tampa, described the continuation of racing as a lifeline.

Tampa Bay Downs is running four days a week but will shift to a three-day-a-week schedule after May 3, running Wednesdays, Fridays, and Saturdays.

O'Connell said horsemen are ecstatic to race, even on a reduced schedule. "If somebody is giving you a free steak dinner, we're not going to [complain] that there was no sour cream on the baked potato," she quipped.

Tampa remains scheduled to conduct two days of racing June 30 and July 1, a summer festival that largely attracts participants based in Florida year-round.

FIRST PUBLISHED 11:24AM, APR 24 2020
If somebody is giving you a free steak dinner, we're not going to complain that there was no sour cream on the baked potato