Bookmakers are hit with bet-to-view ban from ATR courses 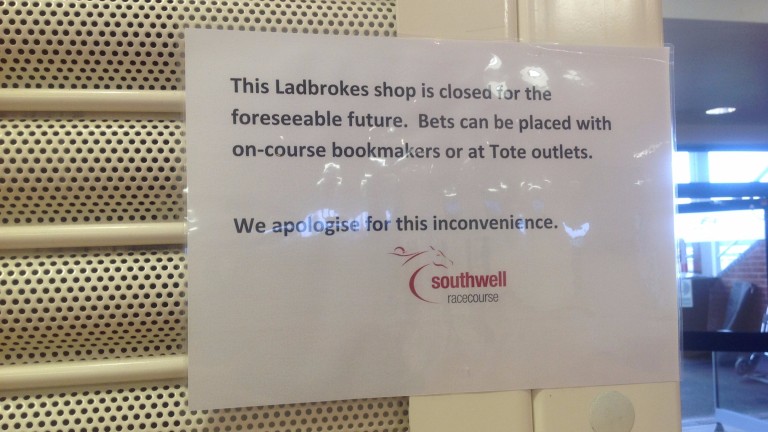 Ladbrokes and Coral have been told they will no longer be able to provide a bet-to-view service from all 22 tracks covered by At The Races as the stand-off over betting shop pictures escalates.

The dispute has been running since the start of the year when new betting shop channel The Racing Partnership (TRP) took over the broadcast of pictures from six  Arena Racing Company tracks – Doncaster, Lingfield, Southwell, Windsor, Wolverhampton and Worcester.

While William Hill, Paddy Power and a number of independents have taken the service, Ladbrokes, Coral and Betfred have not.

TRP has already started legal proceedings claiming misuse of data and also over the use of unofficial commentaries in Ladbrokes and Coral betting shops.

Now the Racing Post understands Ladbrokes and Coral have been informed they are no longer licensed to provide online streaming of races from ATR tracks. The service is provided by ATR, in which Arc is a major shareholder.

No British racing was available in Betfred, Coral and Ladbrokes betting shops on Tuesday, with Lingfield, Southwell and Wolverhampton all falling under the TRP banner.

Arc has also ordered Ladbrokes to close their betting shops at the six TRP courses involved in another escalation of hostilities.

Racegoers at Southwell on Tuesday were not happy that the course betting shop had been closed.

Geoff Archer, from Leicester, said: "It's bad news that the shop is shut and I think it’ll have an effect on the crowd. A lot of people like to watch the other racing or have a bet on the dogs between racing."

Roy McDonald, from Bolsover, said the situation was "disgusting". He went on: "You come here and you want to have a bet on the other meeting and you're left standing like a lemon.

"It's a big loss and it makes me much less likely to come racing –and if you look round, there seem to be fewer people here today."

TRP was set up in December 2015 to sell media rights direct to bookmakers in an attempt to cut out the 'leakage' of funds to bodies outside the sport.

Coverage from the 16 courses not yet involved will switch from SIS to TRP from January 1 next year.

The commercial dispute between Arena Racing Company and three of the major high street betting shop chains is a high-stakes game and the denial of bet-to-view rights represents the playing of Arc's trump card.

Not long ago Ladbrokes and Coral were working with Arc to launch the All-Weather Championships, but now they and Betfred are at loggerheads.

Turning off online streaming is a significant escalation in hostilities and will test the resolve of the bookmakers involved.

Arc will be hoping it is the move that will trigger the two sides sitting down and hammering out a deal.

However, there is a major risk for Arc and the wider racing industry the longer the stand-off continues.

If the bookmakers can hold out until the turf Flat season starts then the pressure on them to sign reduces and, in the long term, it could mean the loss of millions of pounds in media rights income.

Questions will also be asked about the true value of those rights if bookmakers find the amount turnover drops by is less than the amount they are being asked to pay for the pictures.

FIRST PUBLISHED 6:54PM, JAN 31 2017
The dispute has been running since the start of the year when new betting shop channel The Racing Partnership (TRP) took over the broadcast of pictures from six Arc tracks