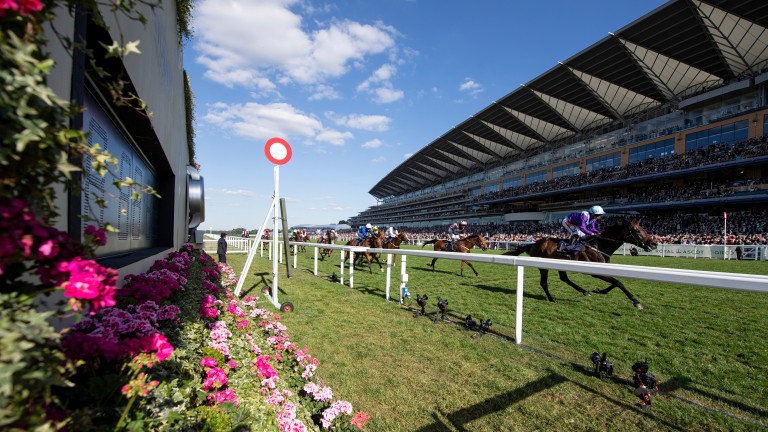 Dash Of Spice comes home a clear winner of the Duke of Edinburgh Stakes
Edward Whitaker
1 of 1
By Lee Mottershead UPDATED 7:10PM, JUN 22 2018

Even with his eyes hidden behind dark glasses you could see what returning to the Royal Ascot winner's enclosure meant to him – and rightly so.

Eleven years had passed since the man who orchestrated the careers of racing icons Desert Orchid and Persian Punch was triumphant at the Flat festival that towers over all others. That last winner came with a horse who raced in the colours of Jeff Smith. So did this one.

Smith has been a devoted supporter of the trainer who in 2007 delivered him Sandringham Handicap success with Barshiba. This time he won him the Duke of Edinburgh Handicap and did so with a horse whose improvement has been marked.

His name is Dash Of Spice and it is one worth remembering.

"I would have been fed up if we'd been beat," said Elsworth, who had produced the four-year-old to romp home in a Derby day handicap at Epsom. It triggered an 11lb ratings rise but that was nowhere near enough to stop Silvestre de Sousa's mount justifying 7-2 favouritism, having unleashed a turn of foot that propelled him to a two-and-a-quarter-length victory.

Fittingly, one training great received his prize from another, with Sir Mark Prescott called upon to present the trophies to a fellow Newmarket resident.

Elsworth, now 78, trained his first Royal Ascot winner in 1980. After seeing Dash Of Spice take that tally to 16, he said: "Ascot comes around every year and with my own increasing years I thought perhaps that was it. For that reason it's nice to turn up with a good one. I won't say it's emotional but it's nice to win for someone who has supported me so well.

"This is a bloody good horse. He's only run seven times and he's lovely.

"Jeff has had great patience. I'm just a trainer, playing around and plying my trade. You need someone to support you like Jeff supports me, saying: 'Whatever you think, Elsie, you get on with it.' Jeff is a great man to have on your side."

In 2003 Elsworth won what is now the Sky Bet Ebor with Saint Alebe, a horse owned by a syndicate put together by his great friend Jeannie Brown. She was here at Ascot. You can bet she will be at York in August if Dash Of Spice turns up.

"I would love to win the Ebor again," said Elsworth.

So many friends and admirers will have loved seeing him win at Royal Ascot again as well.

FIRST PUBLISHED 5:49PM, JUN 22 2018
Ascot comes around every year and with my own increasing years I thought perhaps that was it