Twiston-Davies: handicapper has given us gift with Ballyandy 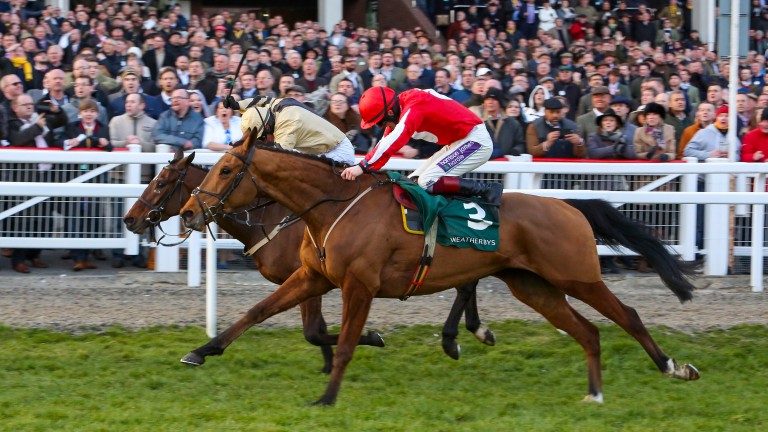 Nigel Twiston-Davies believes he has been "given a gift" by the handicapper as he talked up Ballyandy's prospects of delivering the trainer a second victory in the Betfair Hurdle at Newbury on Saturday.

The winner of last year's Champion Bumper was on Monday night favourite with some bookmakers and a top-priced 13-2 with the sponsor, whose Sportsbook market is headed by the JP McManus-owned pair Consul De Thaix and Movewiththetimes on 5-1 after there were 21 withdrawals at the five-day stage.

Sutton Place, also owned by McManus and who had been favourite, was among the scratchings as trainer Gordon Elliott said the race would come too soon after his January 28 win at Naas.

But Twiston-Davies is set to saddle two with Ballyhill, who won at Hereford and Ludlow in the autumn, joining Ballyandy in the field for the £155,000 prize, for which 20 have stood their ground.

Twiston-Davies, who won the contest in 2014 with Splash Of Ginge, said: "For what Ballyandy has done he has got in very light. Ballyhill has won two not great hurdles and has probably been quite badly punished for it, whereas Ballyandy has been placed in very good hurdles and been let off. For the first time in my life I think we've been given a gift.

"He hasn't run since December for a purpose. We would have run but we wanted to preserve our mark."

Twiston-Davies confirmed he had entered runaway Peter Marsh winner Bristol De Mai in the Betfair Denman Chase, which has been reopened after attracting five entries. The Game Spirit, being run as the Betfair Exchange Chase and in which Altior was one of seven, has also been reopened until Tuesday.

"Bristol De Mai has come out of the race in superb shape," he added. "He won in a canter with his head in his chest and the second horse [Otago Trail] has won since."

The Willie Mullins trained Renneti is top weight on 11st 12lb, while Elliott's only possible representative is Veinard.

"Veinard isn't a definite runner," he said. "We'll make our mind up closer to the time. He does have a lovely racing weight and has plenty of experience running in handicap hurdles, so he'd be entitled to run – he’s in very good form."

He added: "We discussed the possibility of running Sutton Place in the race but decided we'd bide our time. It’s a bit soon after his Naas race and he remains an exciting horse."

Groundstaff at Newbury will cover up the course on Tuesday, with temperatures dipping to as low as -2C over the next three nights.

Clerk of the course Richard Osgood said: "The ground is soft. We're due some rain overnight and from tomorrow things get cooler. I'm putting the covers down mainly because we're going to get three nights of frost."