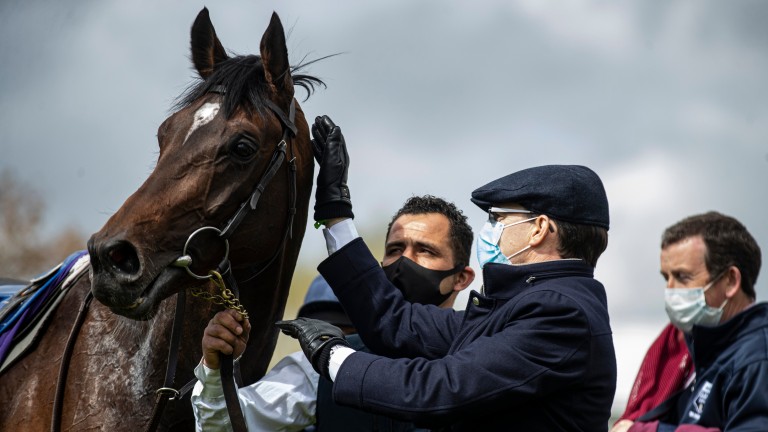 Owned by the Coolmore partners and Georg von Opel, Bolshoi Ballet went off the 11-8 Derby favourite and raced handily under Ryan Moore, but was pushed along before three out by the rider and weakened into seventh place, 17 lengths adrift of the impressive Adayar.

The Ballydoyle trainer described the effort as lifeless, but an on-course vet observed the colt had been struck into on his right hind, which connections believe happened early on in the Classic.

"We've played back the videos and the jockeys have helped us and he definitely had it at the top of the hill. He obviously got it in the first 150 yards so he's very sore this morning. We'll see how he is for a few days.

"Usually with a horse if that happens to him late in a race it doesn't affect them because their blood is up but this happened very early. Because it happened so early, obviously it suggests it was a good reason for the disappointing run."

O'Brien, who was seeking a record ninth Derby triumph, hopes the problem is a minor one and added: "It was just off the tendon at the back. The lads thought seven to ten days [and then] we should be able to start doing something with him again."

The son of Galileo, who won the Derrinstown Stud Derby Trial at Leopardstown last month, is entered in the Dubai Duty Free Irish Derby at the Curragh on June 26 and Sandown's Coral-Eclipse a week later.

FIRST PUBLISHED 5:25PM, JUN 6 2021
Because it happened so early, obviously it suggests it was a good reason for the disappointing run

Is this Aidan O'Brien's greatest Ascot masterstroke or a total shot to nothing? Here's to you Doc, a great and dynamic broadcaster Cheltenham, Aintree - and now Ascot? De Bromhead adds filly to Coronation mix If trainers are clueless when it comes to the Derby, what chance for punters? My Sister Sarah and Metaphorical contribute to Wayne Lordan's treble Size is everything after all as Snowfall and Adayar shoulder their rivals aside