Bolger star back at Leopardstown before fresh Foxhunter bid 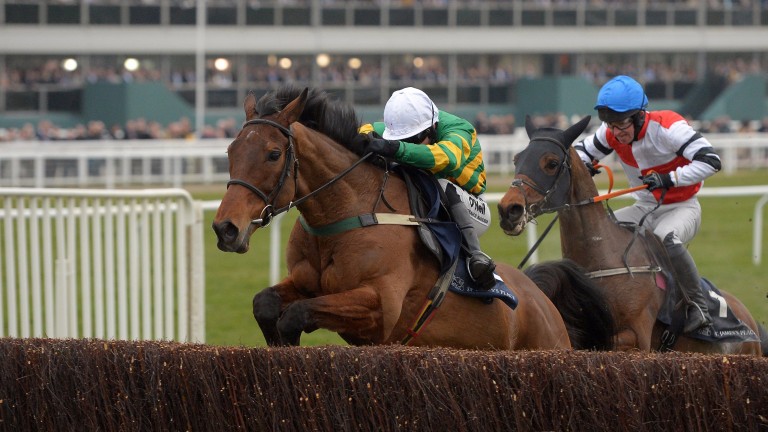 On The Fringe: the popular two-time festival winner returns to action at Leopardstown
1 of 1
By Brian Sheerin 9:45AM, FEB 7 2017

Enda Bolger has admitted his excitement about taking the wraps off On The Fringe at Leopardstown this Sunday as the 12-year-old gears up for a bid for a third successive victory in the St James's Place Foxhunter Chase at Cheltenham next month.

JP McManus's veteran has been a star of the hunter chase scene in recent seasons but has not won on his seasonal reappearance since 2013, and Bolger admits there will be plenty to work on after Leopardstown.

“He’s in very good form but will come on for the run and then hopefully we can get back to Cheltenham in top form,” he said.

“Foxrock is a very classy horse and will be tough to beat but we'll just concentrate on our own fella. It’s not getting any easier as he’s not getting younger but we'll be aiming him at Cheltenham, Aintree and Punchestown again this season. With Nina [Carberry] unavailable Jamie [Codd] will ride him.”

Bolger also provided an update on his festival cross-country team, which is likely to consist of Cantlow, Auvergnat and Colour Squadron.

He said: “Cantlow lost nothing in defeat when second behind Urgent De Gregaine, trying to give him over a stone, at Cheltenham last month and the two pulled a mile clear of the third so that was a very good run. Cantlow loves to see his fences and we won’t be changing too much tactically with him.

“You'd also have to be delighted with how Auvergnat won at Punchestown last Sunday and he deserved a little bit of luck after unseating at Cheltenham when going well. He could be on the up as he’s only seven. Colour Squadron will probably make the trip to Cheltenham as well.”

FIRST PUBLISHED 9:45AM, FEB 7 2017
It’s not getting any easier as he’s not getting younger but we'll be aiming him at Cheltenham, Aintree and Punchestown again this season