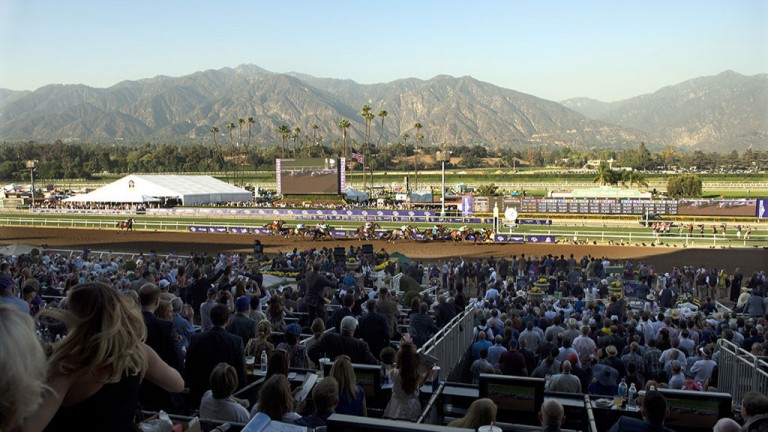 The San Gabriel Stakes was switched to the dirt track at Santa Anita
Edward Whitaker (racingpost.com/photos)
1 of 1
By Nicholas Godfrey 12:49PM, JAN 8 2017

IN A race taken off the turf owing to the rain, Blue Tone (Bob Hess/Kent Desormeaux) earned a shot at the Poseidon Stakes, the $400,000 consolation event on the Pegasus World Cup card at Gulfstream Park on January 28.

The eight-year-old gelding was supplemented to the San Gabriel in the hope the race would be switched to the main dirt track. So it proved, and Blue Tone made the most of his inside post to make all, drawing away in the stretch to score by a length and a quarter from Itsinthepost.

"He must be a mudder," Desormeaux said. "He won't step in a puddle on the road out to the racetrack in the mornings, but I walked him out onto the track today and he was paddling in it, like a child in the mud. He was like a little kid. He was enjoying himself."

The favourite Ring Weekend, who has been mentioned as a Royal Ascot possible, was only fifth of the eight who stood their ground in this off-the-turf event, automatically downgraded owing to the surface switch.

After a disappointing display at the Breeders' Cup, Gormley (John Shirreffs/Victor Espinoza) got back on track in the slop when he got the better of highly rated American Anthem in this first step on the west-coast trail to the Kentucky Derby.

"I expected him to run the way he ran today," said Espinoza. "I know he's still improving but I think he only gets better and better. Hopefully, he gets a lot better, but with this race and his next, he has a lot of potential to keep growing.

"When he's feeling good, he breaks quickly and already running. In the Breeders' Cup he broke slow but today he came into the race in really good shape and got into it right away."

FIRST PUBLISHED 12:44PM, JAN 8 2017
I walked him out onto the track today and he was paddling in it, like a child in the mud. He was like a little kid. He was enjoying himself