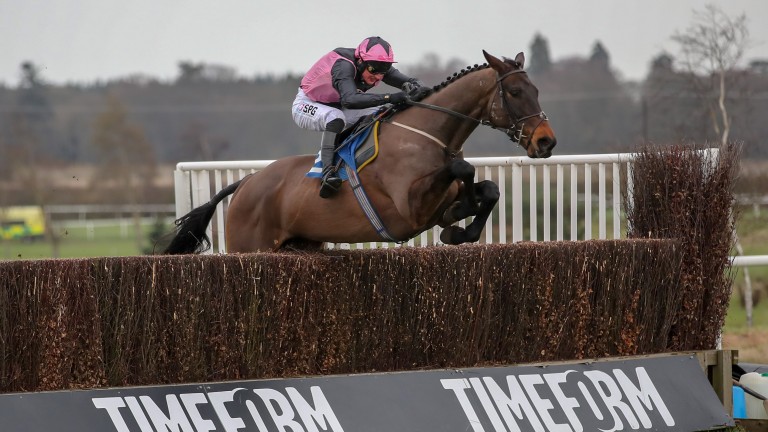 The 640-mile round trip that Nigel Twiston-Davies makes to have runners at Kelso has been a profitable one in the last few years and he could continue that fine association with track specialist Blue Flight.

The six-year-old has enjoyced three consecutive wins, with the last two at the course. He took a novice handicap chase before battling off Grade 1 hero Black Corton to win the Listed Premier Chase three weeks ago.

He is 24lb higher than when recording the first of his hat-trick at Ascot in January, but Twiston-Davies is hoping he can continue to improve.

He said: "The last two times he's been to Scotland he's won, so long may that continue.

"He seems in great form. He's gone up again in the weights so it's getting harder every time, but we're hopeful he can run well again."

Past winners of this race have been improving sorts who have gone on to become quality chasers. The Last Samuri won this in 2015 before finishing second in the following year's Grand National, while subsequent Grade 3 winner Yala Enki won the race in 2017.

One horse who fits that profile is the Michael Scudamore-trained Some Chaos – a highly impressive winner at Wincanton a month ago. He is three from five over fences and looks a smart chaser in the making.

For those who like an ultra-consistent horse, the Peter Bowen-trained Rons Dream is the one for you.

In her 12 chase starts she has been in the first two eight times, and that figure was likely to have been improved last time but for a fall when going well in a Listed mares' chase at Wincanton.

When last seen in handicap company she was a creditable fourth in the Welsh Grand National, and she has strong claims to return to winning ways.

Peter Bowen, trainer of Rons Dream
She's had one run since the Welsh National but she fell. The track should suit and she'll like the ground. She's in good form and rarely lets us down so I'd like to think she's got a good chance.

Michael Scudamore, trainer of Some Chaos
He hasn't done a lot wrong this season. He's improved with every run but will have to improve again off this mark and against this opposition. Looking at what he's achieved, there's no reason why he can't do that. The ground should be fine and he's seemed to handle sharpish tracks before, so that shouldn't worry him. He seems in great shape so we're looking forward to it.

Olly Murphy, trainer of Calipso Collonges
He's in good form, the slower ground and the staying trip will suit him well. He looks like he's improving and he should have a good each-way chance.

Lucy Wadham, trainer of Le Reve
It's great to see him back to his best. He's dropped down the handicap a fair bit but is in great form and we're hoping he can continue the good work.

Sandy Thomson, trainer of Capard King
We haven't had him too long and he ran a nice race for us on his first start at Ayr. He's an older horse now but was rated 139 at one stage and I think if he could find anything like that, then he must have a chance.

FIRST PUBLISHED 6:00PM, MAR 22 2019
He seems in great form, he has gone up again in the weights so it's getting harder every time but we're hopeful he can run well again