Talk of the Tracks NEWCASTLE

Blu gets Morris off mark in all-weather championship race 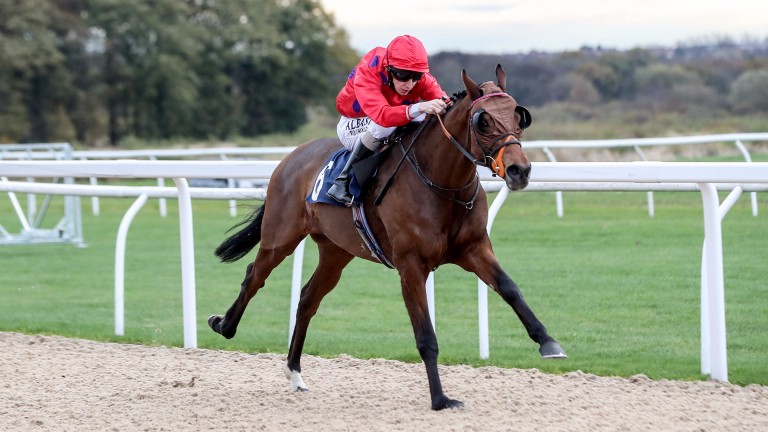 Luke Morris rode his first winner since returning from a broken collarbone as Oxford Blu took the opening 1m2f nursery.

Morris suffered the injury when Ghalib clipped heels at Chelmsford on October 22, and returned to action on Friday, drawing a blank both on that day and Saturday.

The rider has been the champion all-weather jockey in each of the past two seasons, and with this year's campaign having kicked off on October 27, he started the day 11 winners behind the early pacesetter Graham Gibbons.

However, workhorse Morris was not easing himself slowly back into action, he said: "I'm feeling good. I had eight rides on Friday and eight on Saturday so I was going to find out if I was in good shape or not, and it all felt really well. I've been getting plenty of physio which helps it along."

When asked about his all-weather championship prospects, for which he was 1-2 with Coral initially and 4-5 yesterday, Morris added: "I'll just tip away and try to ride as many winners as I can, and see where we end up."

Of convincing winner Oxford Blu, trained by his boss Sir Mark Prescott, Morris said: "The visor has sharpened him up a lot and he's travelled sweetly and put the race to bed nicely."

Sir Michael Stoute and 20-1 winner are not words that usually occupy the same sentence, especially in the aftermath of eight-runner, Class 4 nurseries, but that was just the case here on Monday as many punters were left kicking themselves after Textured's win in the 7f nursery.

Graham Gibbons was the man on board for owners Cheveley Park Stud. He had to be at his strongest as the filly was under pressure early and only got up by a short-head from the Mark Johnston-trained Morning Suit.

Gibbons said: "That's probably the minimum for her, she's done well to win and she probably wants a mile and a quarter or a mile and a half next year."

Two days after Graham Lee dead-heated for the Listed mares' bumper at Cheltenham on the Peter Atkinson-trained Irish Roe, the jockey was back on the scoresheet on the Flat when Savannah Beau landed the 6f handicap.

Remarkably the four-year-old filly, running for Iain Jardine for the first time, was Lee's first winner on the Tapeta track here at the 55th attempt.

Savannah Beau is owned by Market Avenue Racing Club Ltd, and Sunderland footballer John O'Shea was in attendance with the owners.

There will not be many occasions that a straight forecast, featuring a Sir Michael Stoute winner and a Mark Johnston runner-up in an eight-runner race, will pay £343.02.