Only Limerick survives after snow claims cards at Carlisle, Ffos Las and Navan 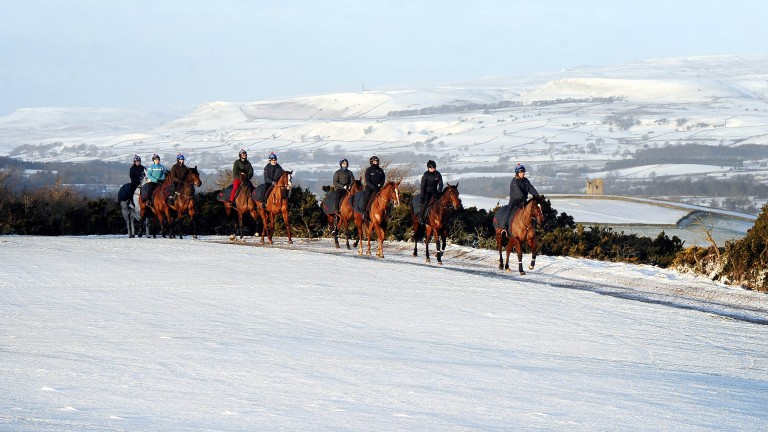 Racehorses make their way along snow covered roads to the gallops on Middleham Moor near Leyburn,
John Giles
1 of 1
By James Burn UPDATED 1:18PM, MAR 18 2018

The latest arctic blast has wreaked havoc on Sunday's action in Britain and Ireland, with Carlisle, Ffos Las and Navan forced to cancel due to snow.

Sadly we have had to abandon today’s race meeting due to the snow! Tickets will be refunded automatically. Please call the office if you have any questions #Carlisle #CarlisleRaces #Cumbria pic.twitter.com/zk9hoOv7In

At Ffos Las, snow arrived overnight, and clerk of the course Keith Ottesen said: "We've had a covering and it's enough snow for us to not be able to race. It's due to continue through the morning and won't suddenly disappear as the daytime temperature will only be 1-2C."

Unfortunately racing is cancelled here today. Track unfit for racing due to a covering of snow.

Snow has also led to the cancellation of Southwell's fixture on Monday. But Limerick has beaten the elements, and Cheltenham kings Gordon Elliott and Davy Russell each have six chances of winners – they team up five times, with a brace of Graded races for mares on the card.

Tom Segal captains the tipping ship, while Alan Sweetman provides the pick of the bets from Ireland.

We've also got the favourites to focus on and Tips Box.

A Cheltenham Festival-special RPSunday also has all the usual goodies.

We've also some football tips to help you hit the back of the net ...

The team tackle the Leicester v Chelsea FA Cup tie and take a look at the Spanish and Italian action.

A dream week at Cheltenham for trainer Gordon Elliott and expect the show to roll on today at Limerick where he has six runners with three short-priced favourites.