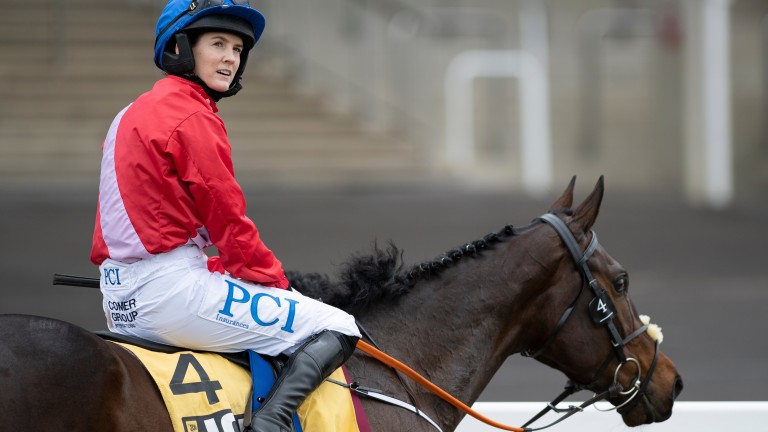 Rachael Blackmore will ride Envoi Allen for the first time for his big clash with Monkfish in the Dooley Insurance Group Champion Novice Chase at Punchestown on Tuesday.

Jack Kennedy has been on board Envoi Allen for all four of his outings over fences, including when falling at the fourth when a 4-9 favourite for the Marsh Novices' Chase at Cheltenham, while Davy Russell was in the saddle for his unbeaten novice hurdle campaign.

It had been hoped by connections that Russell would return from injury in time to renew his association with Envoi Allen at Punchestown, but he ruled himself out of the meeting on Wednesday so Blackmore has been given the nod to partner the 164-rated seven-year-old by trainer Henry de Bromhead.

He said: "Rachael will ride Envoi Allen at Punchestown. He seems to be in great order and worked really well the other day. I've been delighted with him. It's going to be fascinating to see him running over three miles for the first time and that will tell us a lot with regard to next year and what sort of route we might take for that campaign."

In what is arguably the most eagerly awaited showdown of the entire week at Punchestown, Paddy Power has installed Monkfish as their marginal 11-10 favourite with Envoi Allen available at 5-4. Colreevy, who has been given the green light to take on the geldings, is 7-1.

Monkfish is 4-1 favourite to win the 2022 Cheltenham Gold Cup with Envoi Allen a general 7-1 shot.

Blackmore is chasing history as she bids to become the first female champion jockey in Ireland. She bettered her previous-best seasonal tally at Kilbeggan on Friday when helping herself to a treble, bringing her on to the 91-winner mark.

She is now just four winners behind Paul Townend and news that she will partner Envoi Allen for the first time will be music to her ears as he is added to a brilliant book of rides that already include both Honeysuckle and Bob Olinger.

Which British runners are taking the challenge to the Irish at Punchestown?

Denise Foster relishing prospect of rematch between Abacadabras and Honeysuckle

FIRST PUBLISHED 2:40PM, APR 24 2021
He seems to be in great order and worked really well the other day

Red-hot Mike O'Connor proves the master once again for in-form Henry de Bromhead Frankie Dettori records 75th Royal Ascot winner with victory on Indie Angel Fairytale for Cummins as apprentice rides first Irish winner on 50-1 outsider Shadwell 'trimming' continues with more than 100 horses catalogued for July sale This is all about Samcro - but will the one-time future megastar battle again?