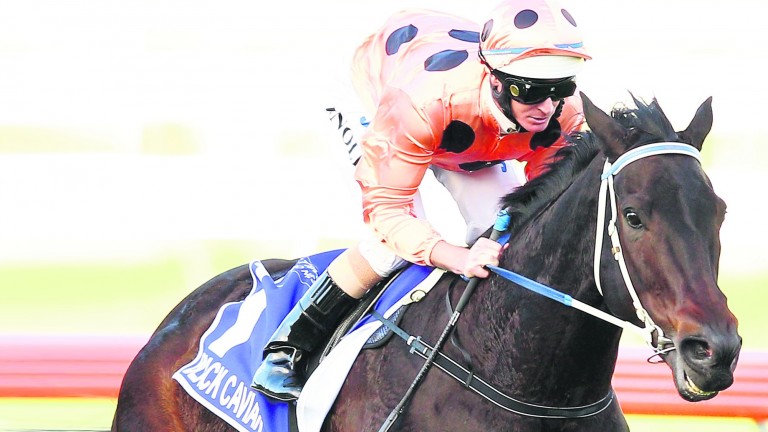 Black Caviar will be represented by her first foal, Oscietra, at Flemington on Sunday
Mark Dadswell
1 of 1
By Richard Birch 9:07AM, JAN 1 2017

Oscietra, the first foal of champion racemare Black Caviar, is likely to start a warm favourite when she makes her debut in the New Year Plate for fillies at Flemington on Sunday.

Named after a prized type of caviar, the two-year-old has drawn stall three in a 12-runner field, and expectations are understandably high.

Trainer David Hayes said: “We don’t know how good the opposition are. She is drawn three and will just be going down the middle of the track.

“There's a bit of speed around her so hopefully they’ll all be going together.

"She’s got so much expectation on her it would be lovely to see her get the job done.”

Hayes believes Oscietra’s attitude will hold her in good stead. “I’d hate her to flop and I don’t think she will,” he said. “There’s a lot of horses that don’t win on debut but we’re hoping she can.”

The remarkable Black Caviar won her first start over the 1,000 metre course as a two-year-old in April 2009, the beginning of an unbeaten 25 start career.

Owned by the same connections as Black Caviar, Oscietra has had two jump-outs at Flemington in preparation for her debut, winning on each occasion.

FIRST PUBLISHED 2:45PM, DEC 30 2016
She's got so much expectation on her it would be lovely to see her get the job done