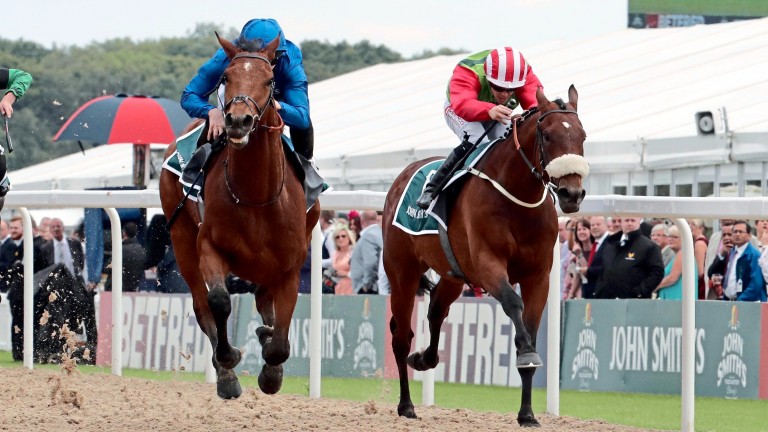 Seamour (right) had looked a likely winner of last year's Plate but was denied by Antiquarium
John Grossick
1 of 1
By James Burn 7:01PM, JUN 28 2017

Brian Ellison celebrated his 65th birthday on Wednesday but will not mind waiting a few days for the perfect present, which he believes can be delivered by Seamour with victory in Saturday's £150,000 Stobart Rail Northumberland Plate.

Seamour, who was available for the Newcastle feature at 9-1 on Monday night, has been well backed and is now no bigger than 6-1, while he is favourite with some firms ahead of Flymetothestars.

The race is the one Ellison covets above all others, although he was left heartbroken by Seamour's agonising defeat 12 months ago.

Sent off the 13-2 favourite, he swept to the front inside the final furlong and looked in full control, but was denied by Antiquarium, who stayed on powerfully under James McDonald.

Brian Ellison: "I think my fellow is probably one of the best horses I've trained"
MARTIN LYNCH
It was the second year running the son of Azamour had failed to justify Plate favouritism – he was a two-and-a-quarter-length sixth in 2015 – but Ellison, born on Plate day in 1952, gives his smart stayer a real chance of making it third time lucky this weekend.

The Malton trainer said: "The Plate one of the best races in the north and when you've got horses who can compete in it you like to win it," he added. "I think my fellow is probably one of the best horses I've trained and we just want that bit of luck.

"Everything has gone fine and he's working well, so we're very hopeful. Last year he got drawn wide and was stuck out wide the whole way. He showed a good turn of foot to take it up and then we got collared, but the winner got a great ride off James McDonald. We were unlucky but he ran well.

"It's obviously a very good race, but all we can do is get our fellow there in good form and hope he runs his race – and get a better draw than we have done the last two years."

Ben Curtis, who was aboard Seamour last year, has not ridden him in his last three starts but will be back on board on Saturday.

"He's going well and Brian has him in tip-top shape," said the jockey. "He's happy with him and I think everyone else is happy with him. He handles the track, but just needs a good draw and a bit of luck in running. I said to be drawn between six and ten I'd be happy; that would be ideal.

"If you ran last year's race ten times and he ran the same race he probably would've won it nine times. It's very rare in a two-mile race something comes flying out the pack, especially when you put the race to bed.

"You have to approach it like every other ride, but after last year they say once bitten twice shy. You learn from your mistakes and things that haven't gone to plan in the past.

"When we get the draw we'll know more, but if I'm travelling well two down I won't be giving him a kick in the belly and setting sail for home. But I'll ride the horse the way he needs to be ridden, whatever way he's feeling at the time – that's the best way to go into any race."

Curtis, who began Wednesday on the hot jockeys' list with a 21 per cent strike-rate in the last two weeks, would love to deliver the prize for Ellison.

"I'd love to win it for myself – it's a good pot and prestigious race –but more so for Brian, who's been trying for years. After coming so close last year it'd be brilliant to get it off his back."

FIRST PUBLISHED 5:52PM, JUN 28 2017
The Plate one of the best races in the north and when you've got horses who can compete in it you like to win it