Bin Suroor looking to the skies as Derby countdown begins 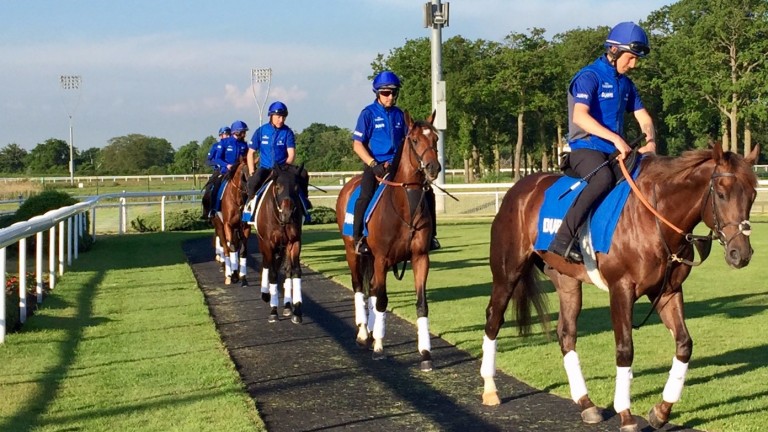 William Buick will take over from Franny Norton on Dante winner Permian in the Derby, Buick having managed to get a riding ban reduced on appeal at the BHA on Friday.

The significance of the disciplinary panel reducing Buick's five-day ban to four days, enabling him to move his suspension dates away from Group 1 racedays, became quickly apparent with his booking for the Mark Johnston-trained Permian, a best-priced 14-1 shot for the Investec-backed Classic and due to be supplemented on Monday for £85,000.

While he doesn't race in the Godolphin colours, the colt is owned by Sheikh Mohammed's son Sheikh Hamdan and is seen as part of the Dubai operation's team. 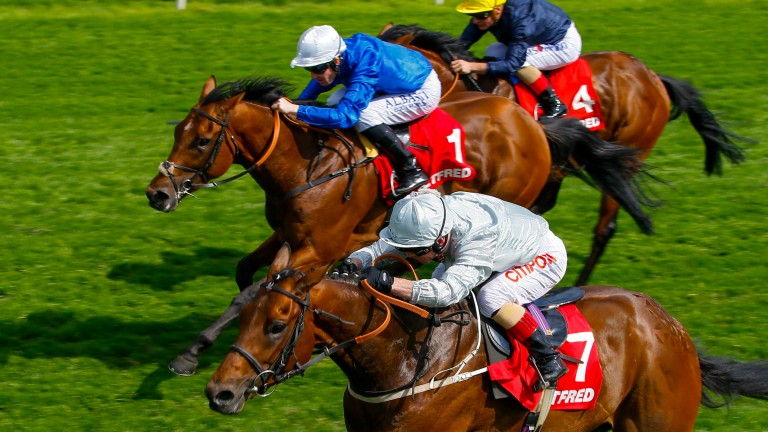 Permian and Franny Norton (near side) land the Dante from Benbatl and Pat Cosgrave. William Buick takes over on the winner in the Derby

Johnston said: "In some ways it's flattering William is Godolphin's retained jockey and they have a few in the race and have chosen Permian for the stable jockey.

"It's their prerogative and you can't argue with that. It's not as if he's had the same jockey all the way through; he's had several different jockeys."

He added: "Permian is sure to stay and sure to be better for the step up in trip."

Bring on the rain was the message from Saeed Bin Suroor after the Godolphin Stables team paid a visit to Chelmsford on Saturday to fine-tune two of their three likely runners in the Classic.

'We want rain for all three'

The exercise revolved around giving once-raced ten-length Newbury maiden winner Dubai Thunder further experience, and he had the right man on board in Kieren Fallon, a three-time Derby winner.

Bin Suroor hailed the work a big success, and said: "We'll probably run three in the Derby, Best Solution, Dubai Thunder and Benbatl. We didn't need to bring Benbatl to Chelmsford as he's plenty of experience, but what we want for all three is some rain. That would help their chances."

He added: "We'll make a decision about jockeys nearer the time, but Pat Cosgrave rode Best Solution to win at Lingfield and Oisin Murphy is available to ride one of the others."

The field for the Derby would appear to be heading below the safety limit of 20 after Yucatan, one of Aidan O'Brien's entries, was ruled out and is unlikely to be seen until the autumn.

There are 16 left in Friday's Investec Oaks after Saturday's forfeit stage, headed by favourite Rhododendron, one of six remaining entries for Aidan O'Brien. Godolphin have left in Prix Saint Alary winner Sobetsu, although she would run only if it is very soft.

There are 11 still in the Coronation Cup on the same card, including Frontiersman, who was a late absentee from York on Saturday owing to heat in a leg. Godolphin paid £25,000 to add him to the Coronation Cup, with Jack Hobbs missing out and waiting for Royal Ascot.

Conditions at Epsom on Saturday remained quick after little rain but it could be a different story by Monday lunchtime, with between 10mm and 30mm of rain forecast from Sunday.

Clerk of the Course Andrew Cooper reported: "It's breezy today, which has dried us out to nearly good to firm, but we're set to get some rain from Sunday lunchtime. Forecasts of amounts vary.

"After Monday it rather settles down again and anything we do get may well have dried out again by next weekend. We'll monitor it."