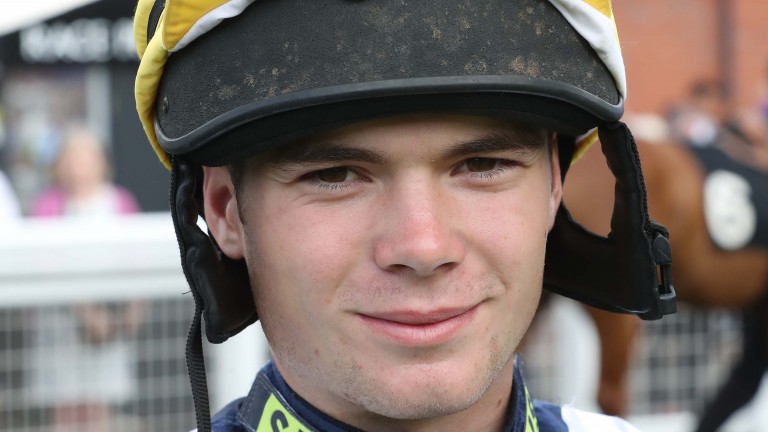 Apprentice jockey Billy Garritty was hit with a 21-day ban for ignoring the veterinary surgeon's advice after Princess Of Lir was withdrawn at the start of the 6f nursery at Newcastle on Tuesday.

The two-year-old was taken out of the race by the starter after she became unruly in the stalls. The vet at the start advised the 5lb claimer to walk the filly back to the stables but he subsequently remounted Princess Of Lir and rode her back down the track.

A stewards' inquiry deemed Garritty to be in breach of the rules and he will serve his suspension from December 29 to January 18.

Garritty's agent Wilson Renwick spoke on his behalf and said: "The whole thing was basically a mix-up. The vet had told Billy to walk the horse back and, as Billy was walking her back down the track, somebody said to him he could get on and ride her back.

"There has been a misunderstanding in what Billy was required to do."

While the BHA stewards' report said Garritty's riding offence was ignoring the vet's instructions and riding a lame horse back from the start, Renwick said the latter was not the case.

He added: "The filly at no point was found to be lame. It wasn't actually riding a lame horse back, it was riding a horse that had been withdrawn."

The Newcastle stewards' report said: "An inquiry was held to consider why Billy Garritty, the rider of Princess Of Lir, had ridden back from the start when his horse had been withdrawn, ignoring the veterinary surgeon’s instructions.

"The rider, veterinary surgeon and the starter were interviewed. Having heard their evidence they found the rider in breach, in that he had acted against the instructions of the veterinary surgeon. Garritty was suspended for 21 days."

Princess Of Lir's trainer Richard Fahey was informed by the stewards that the filly will not be allowed to race again until she passes a stalls test.

Save The Spirit's impeccable behaviour was rewarded with a first victory in a dramatic 6f novice stakes that turned into a match race.

There was trouble at the start when odds-on favourite Mondammej was reluctant to be loaded, which meant rivals Save The Spirit and Kumasi faced a long wait in the stalls. The latter became unruly and was withdrawn by the starter, leaving only two runners.

Mondammej was 5-6 favourite but was beaten a head by 15-2 shot Save The Spirit, whose rider Danny Tudhope notched a treble on the day.

Explaining what happened at the start, Tudhope said: "Kumasi was in the stalls and he started lashing out at the back of the gates. Once they do that, it's an automatic withdrawal. My lad was green but he took a big step forward and he'll sharpen up a lot."

Frankie Dettori at 50: five secrets to the charismatic Italian's success

FIRST PUBLISHED 5:03PM, DEC 15 2020
The vet had told Billy to walk the horse back and, as Billy was walking her back down the track, somebody said to him he could get on and ride her