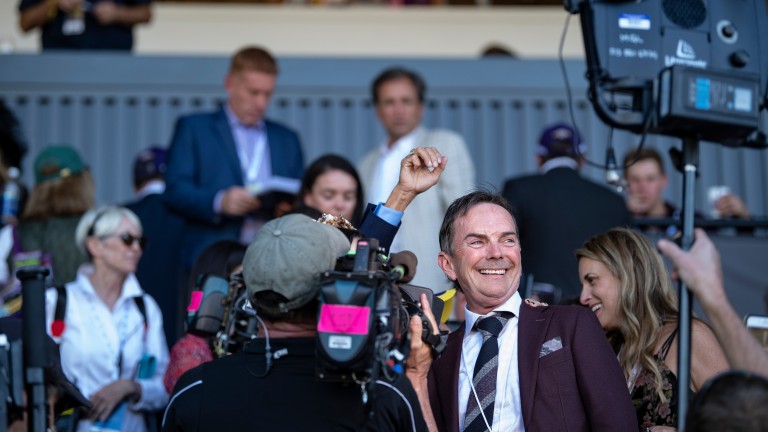 Trainer Peter Eurton is the centre of attention after Storm The Court's victory
Edward Whitaker / racingpost.com/photos
1 of 1
By James Burn UPDATED 12:00AM, NOV 2 2019

The Breeders' Cup Juvenile at Santa Anita on Friday produced an enthralling finish, but not between big guns Dennis' Moment and Eight Rings as longshot Storm The Court fended off fellow outsider Anneau D'Or.

Sent off a 45-1 shot, the Peter Eurton-trained colt got to the lead early under Flavien Prat, but was tracked by Eight Rings, representing local darling Bob Baffert.

However, his effort folded in the straight and Anneau D'Or – a 25-1 chance – appeared the big threat, only for Storm The Court to hold on for a shock victory. 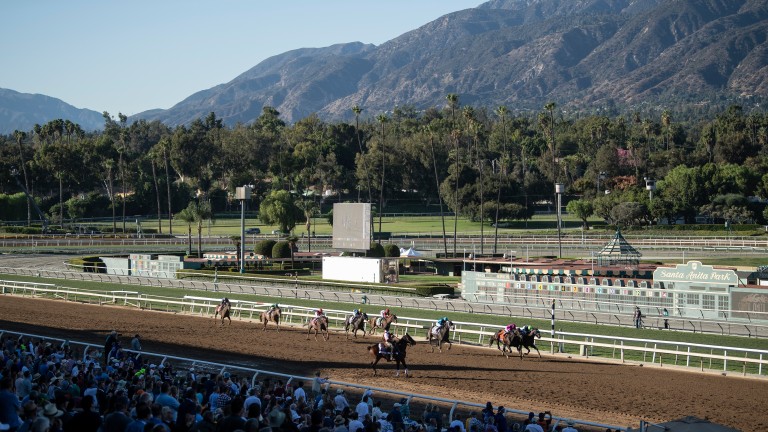 From a racing family and a former jockey, the Californian-based Eurton was celebrating his second Breeders' Cup victory after Champagne Room in the Juvenile Fillies three years ago.

He was interviewed on NBC by his daughter Britney and said: "On the lead he never seems to give up – to fight back like that, I don't know if I can find the words.

"To do it at home in front of all my friends and family is amazing. We're going to have some fun tonight and I thought we had a chance when he was getting that bit of an easy lead.

"Eight Rings just laid off him enough to give him that extra punch down the lane.

"It's crazy. I don't know what to say and I'd just like to thank everybody."

British Idiom toughs it out

The Breeders' Cup Juvenile Fillies also produced a cracking duel with British Idiom getting the better of the stubborn Donna Veloce, who lost little in defeat.

She looked a major player when sweeping to the front, but her rival – trained by Brad Cox – matched her commitment and desire and was able to secure a game victory under Javier Castellano, winning his 11th Breeders' Cup race. 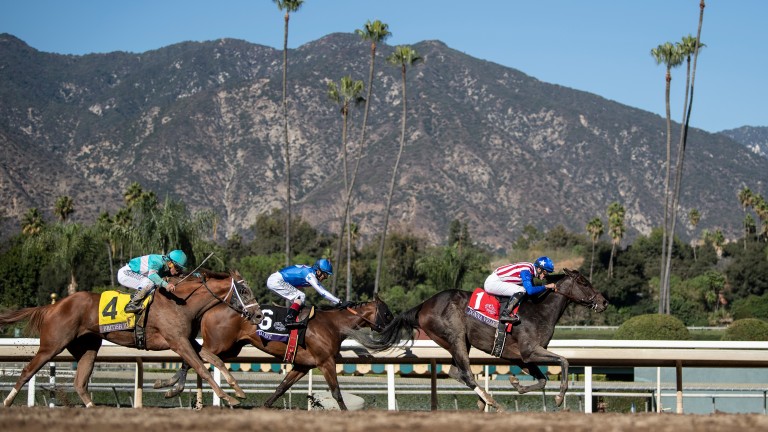 He was in awe of British Idiom's determination and said: "She's very mature and I've liked everything she's done since she started her career.

"She was a little bit off the pace and had a lot of dirt in the face, but she got it done. I'm very proud of her."

Cox, doubling his tally at the meeting after Monomoy Girl landed the Breeders' Cup Distaff 12 months ago, said: "I think I'm blowing harder than she is. That was an intense stretch duel and I'm glad we came out on top – she's an amazing filly."

Fresh US whip controversy shows jockeys need to change their mindset Watch: Hot Rod Charlie demoted after rival is unseated in Grade 1 Haskell Would you side with Snowfall or Love if they go head-to-head? Sublime Snowfall records biggest winning margin in Irish Oaks for over 100 years Japan just does enough to bag the Meld Stakes at Leopardstown Snow Lantern mows down Mother Earth and Alcohol Free in epic Falmouth