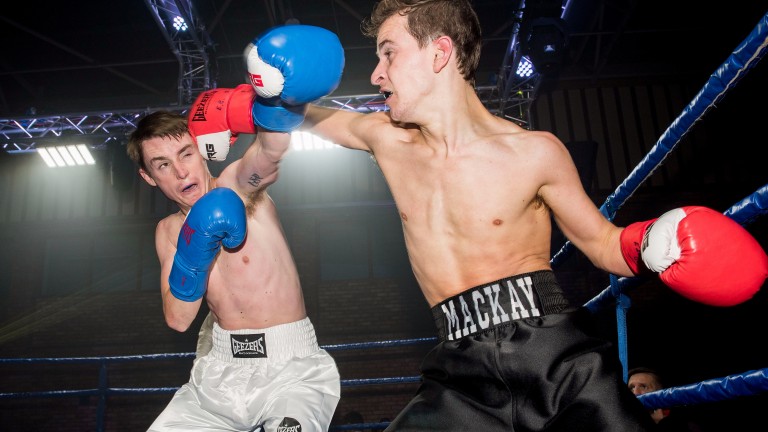 The return of old-style boxing evenings packed a punch in Newmarket on Saturday night as a capacity crowd turned out to raise money for paralysed former jockey Allan Mackay at the town's leisure centre.

Mackay's eldest son Nicky bravely donned the gloves for the first time to take part in the ten-fight promotion and lost nothing in defeat when going down on points to weighing room colleague Simon Pearce after three frenetic rounds.

The black-tie event, which was put on by former rider Eddie Guest and expected to raise over £10,000 for Mackay snr, was supported by many high-profile jockeys including William Buick, James Doyle, Adam Kirby, Ted Durcan, Jimmy Quinn and Rab Havlin, as well as top-notch rider turned columnist Freddy Tylicki.

Guests had to wait until nearly 10.45pm for the main event of the evening in which Pearce put his experience to good use for a unanimous points verdict over Mackay, who nevertheless went down fighting.

Pearce, who had lost to William Carson in similar fashion in April, was more fight-savvy this time around and, after a largely even first round, rewarded the many who had backed him at 11-8 to win the bout with sponsors Paddy Power. 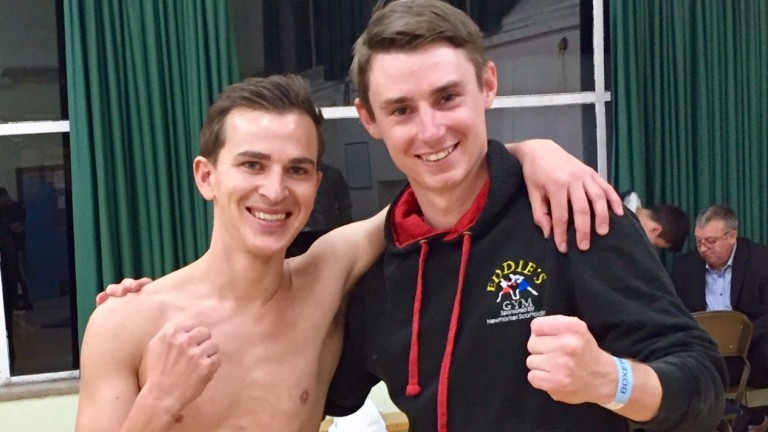 All smiles before the fight : Nicky Mackay and Simon Pearce

Despite his defeat, 8-15 favourite Mackay was happy just to have taken part. He said: "I thought I was getting back at him at the end but fair play to Simon – he'd had a previous run and it showed.

"It was an achievement just to get in there and I thought I did well considering I'd only started training six weeks ago. Hopefully dad will be proud of me and it helps to raise some cash, but this was a one-off for me."

Pearce, whose walk-on music was Danger Zone from the film Top Gun, may have been top dog between the ropes but admitted it was not all plain sailing.

He said: "Nicky shocked me in the first round as he came out throwing a few good shots and I thought I'd better step it up in the following rounds.

"Fair play to him – I've been training and boxing for a year whereas he's only been doing it for a few weeks. I kept busy out there and it was nice to get it done, but I'll probably hang up my gloves now."

Other jockeys taking part in the event were William Carson, who came fresh from two rides at Lingfield to defeat Joey Leroy, the latter coming on dressed as Del Boy and to the theme from 'Only Fools and Horses'.

There was almost as much sparring outside the ring as in it at the charity auction in which James Doyle bid £1,000 for framed pair of Anthony Joshua's trunks, only to be counterpunched by his Godolphin counterpart William Buick who paid £2,000 for a signed Joshua replica belt.

FIRST PUBLISHED 1:27PM, NOV 26 2017
I thought I was getting back at him at the end but fair play to Simon - he'd had a previous run and it showed