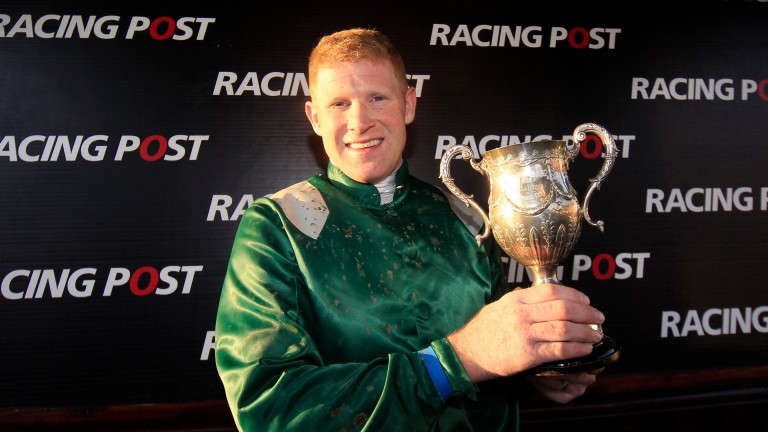 Colman Sweeney, pictured after winning the Racing Post Champion Chase at Punchestown in 2013, recalls scoring on Denman in the pointing field
Patrick McCann
1 of 1
By Tony O'Hehir 4:22PM, OCT 9 2018

Colman Sweeney rode three Cheltenham Festival winners as an amateur rider but admits he never sat on a horse anywhere near as good as Denman.

When Denman won his only point-to-point start at Liscarroll, County Cork, by 12 lengths in March 2005, Sweeney was on board, and on Thursday he reflected on his involvement with the budding star in the early days of the future Gold Cup winner's career.

He said: "I first sat on Denman at Adrian Maguire's place about a month before he ran at Liscarroll. Even at that stage he was big and strong and I quickly realised he was something special.

"I remember schooling him over three fences in the space of two furlongs. He was going very fast heading for a post and rail and I had some job trying to stop him jumping it. I managed, but fell off in the process.

"When I went to ride him at Liscarroll Adrian said to me the horse might need the run. On the first two circuits I'd never ridden a horse who pulled so hard and it was only at the fourth-last that he started to settle and dropped the bit.

"I didn't know what to expect and thought he might get tired, but he passed five or six horses going to the second-last and went away to win what was a good maiden very easily."

He recalled: "Riding Denman gave me a brief window on what it must be like for the top professionals riding really good horses on a regular basis. It made me fierce jealous!"

Sweeney, who retired from riding three years ago, won the Foxhunter Chase at Cheltenham on Sleeping  Night for Paul Nicholls in 2005 and twice on Salsify, trained by his father Rodger, in 2012 and 2013. He now works on track as a cameraman for the Irish Racing Integrity Services team.

You may also wish to read

FIRST PUBLISHED 4:22PM, OCT 9 2018
Riding Denman gave me a brief window on what it must be like for the top professionals riding really good horses on a regular basis