Big-race trio could give O'Brien, Moore and Coolmore yet more cheer 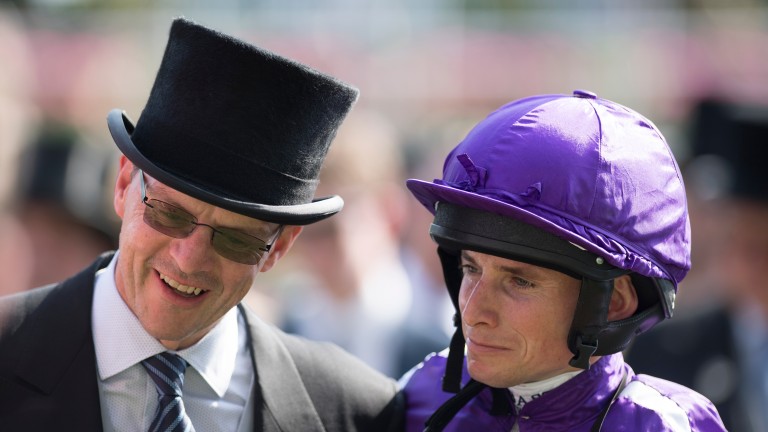 Aidan O'Brien and Ryan Moore have again been firing in Royal Ascot winners
Edward Whitaker
1 of 1
By Lee Mottershead UPDATED 9:17AM, JUN 21 2019

This is a day, like so many other Royal Ascot days, that threatens to revolve around him, him and them.

Punters will be excited, bookmakers will be nervous and, if betting on the afternoon's three showpiece races proves accurate, Aidan O'Brien, Ryan Moore and the Coolmore lads will be celebrating. 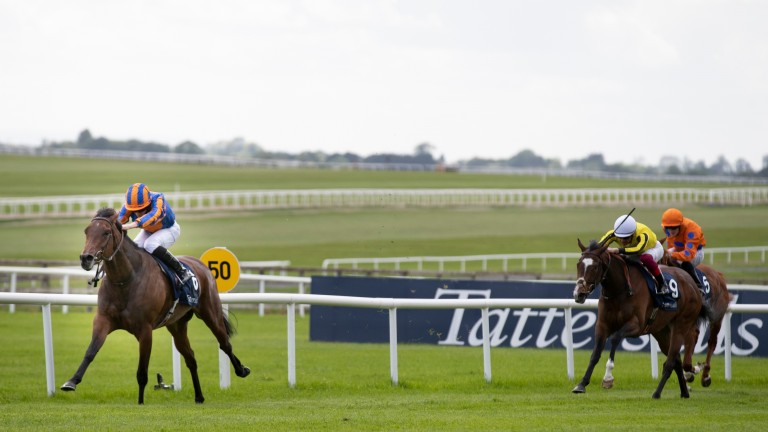 Hermosa was miles too good for the opposition in the Irish 1,000 Guineas
Patrick McCann

For Hermosa, Ten Sovereigns and Japan there are big prizes to be won on Friday. They will probably win them.

It is not beyond the realms of possibility Japan could be sent off odds-on favourite for the King Edward VII Stakes. If he wins and Ten Sovereigns then follows up in the Commonwealth Cup – for which he could start at similarly prohibitive odds – the price about Hermosa completing a treble for herself and a different one for her connections will surely get shorter and shorter.

Of the Ballydoyle trio Hermosa was arguably the least expected to attain star status as a three-year-old, yet already the daughter of Galileo is a dual Classic heroine. On 1,000 Guineas day at Newmarket she was a 14-1 shot but those odds were belied when she made all to win under Wayne Lordan. She was good then but she was even better when leading all the way to land the Irish 1,000 Guineas, this time with Moore doing the steering.

Echoes with the recent past are obvious. In 2017 Winter bagged the 1,000 Guineas for O'Brien and Lordan before following up at the Curragh when teamed with Moore. She was then expected to claim the Coronation and did. The expectations surrounding Hermosa are similarly strong, even allowing for the fact her opponents include another Classic winner, the unbeaten Poule d'Essai des Pouliches heroine Castle Lady.

Classic ambitions were also held for both Ten Sovereigns and Japan. Ten Sovereigns was sent off 9-4 favourite for the 2,000 Guineas but seemingly failed to stay, weakening inside the final furlong to finish fifth. O'Brien declared him a sprinter straight after that race. Ten Sovereigns now has the chance to prove him right in a race that has somewhat fallen apart in the absence of Calyx and the late Lady Kaya. 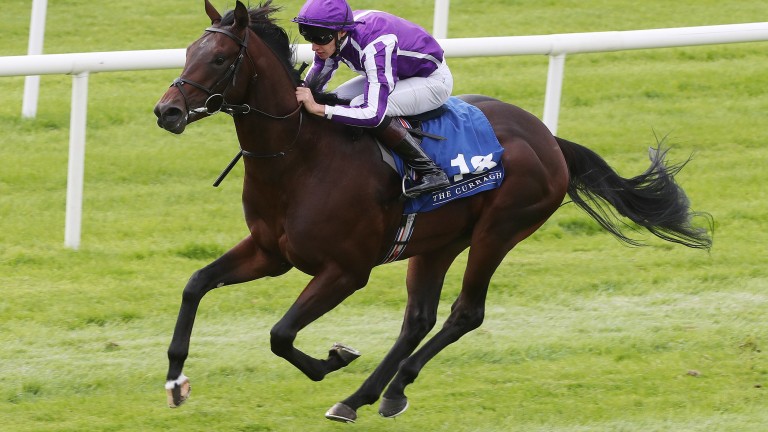 Ten Sovereigns drops back in trip for the Commonwealth Cup
Caroline Norris (racingpost.com/photos)

For Japan there were Derby dreams. Over the winter he was considered by many to be Ballydoyle's principal Epsom hope, but while Ballydoyle won the Derby, Japan did not. He could, however, win the race widely known as the Ascot Derby, the King Edward VII Stakes.

Moore and O'Brien may also conceivably win the Albany Stakes and Sandringham Handicap. The pair have Precious Moments and Coral Beach in those two contests, but Moore must go it alone in the Duke of Edinburgh Stakes that closes the card. This time Mark Johnston is the supplier of his mount but that mount, Baghdad, might well start favourite. He might well also win.

It will be a surprise if Moore does not do a lot of winning on Friday – and if he has a good day, so too will O'Brien and Coolmore. In that sense, this could be the sort of Royal Ascot afternoon we have come to expect.

As is traditionally the case, the Queen has been regularly sighted at this year's royal meeting. Her racing colours have not.

From Choir Boy in 1953 to Dartmouth in 2016 the Queen has enjoyed 23 winners in her iconic purple, gold, scarlet and black silks  but this year opportunities for that haul to be increased have been few and far between.

Following Seniority's defection from the Royal Hunt Cup, Eightsome Reel, an outsider in Thursday's Hampton Court Stakes, has been the only royal runner. 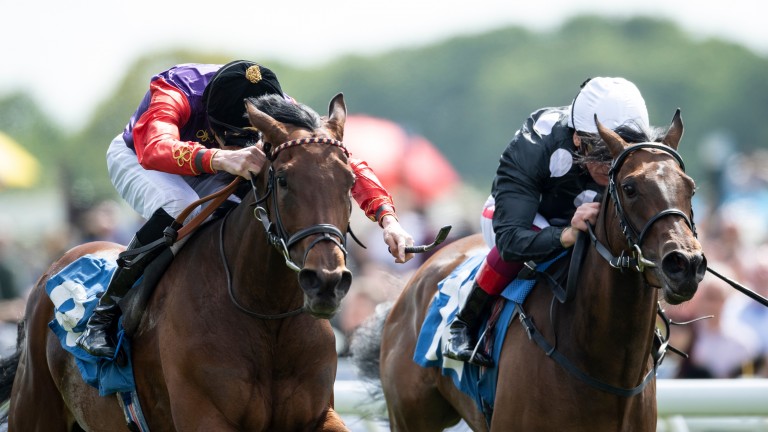 The Queen's only other candidate at her favourite fixture is Magnetic Charm, who concedes weight all round in the Sandringham Handicap – and she very well might do so successfully.

Trainer William Haggas has been aiming the filly at the race for some time but his thoughts were slightly skewed when the daughter of Exceed And Excel won a York Listed race on her seasonal return. That made the Coronation an option but the Queen has stuck to the original target, meaning Magnetic Charm will tackle the Sandringham as one of the leading fancies.

Should she win the victory will have been achieved by a tight margin, no matter the winning distance. The Sandringham is restricted to fillies rated no higher than 105. After winning at York the BHA handicapping team raised Magnetic Charm from 100 to 105. Just a pound more could potentially have denied the Queen Royal Ascot winner number 24.

Jubiloso a fascinating runner for Stoute

Jubiloso is not the sort of filly you expect to see Sir Michael Stoute running in a Group 1 race. The fact he is running her in one has to be of interest.

Frankel's niece has raced only twice, following up a smooth Chelmsford maiden success with an even easier victory in a Newbury novice event. 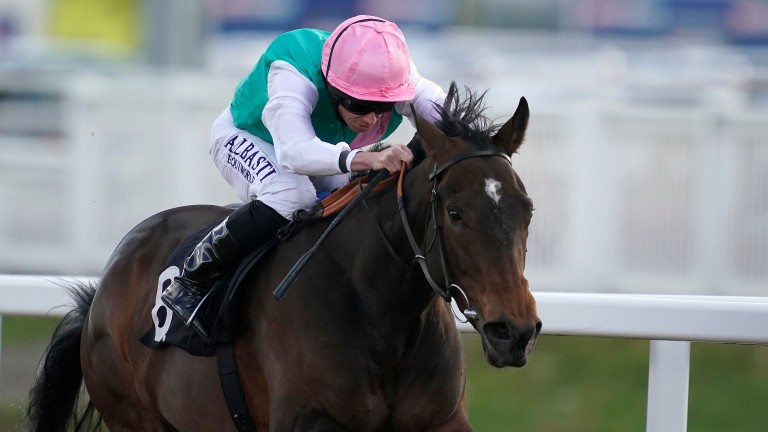 Despite having not even been tested in Listed waters Jubiloso is contesting the Coronation Stakes, a showpiece Stoute has won with Sonic Lady, Milligram, Exclusive and Russian Rhythm, all four of whom had finished either first, second or third in the 1,000 Guineas.

They were experienced at the highest level. Jubiloso is not. Her master trainer's decision to let her run in the Coronation is therefore fascinating.

If there are two people who deserve a change of luck this week, Eve Johnson Houghton and Charles Bishop are those two people.

Trainer and jockey have so far been represented just once this week, and the representation did not last long, for last year's Queen Anne Stakes winner Accidental Agent disgraced himself by standing still when the stalls opened on Tuesday.

Their only remaining chance of an Ascot triumph will come with Graceful Magic, who sprang a 33-1 shock on her Sandown debut.

She will also be meaty odds for the Albany Stakes but her trainer and rider know how to spring a Royal Ascot surprise. This time they will be hoping it is a good one.

Ground conditions improved on a drying Thursday at Royal Ascot and the last two days look set to be largely rain-free.

"There is the chance of an odd shower this evening but it will be largely dry for the rest of the meeting," said clerk of the course Chris Stickels.

"We had a few spits and spots of rain today but nothing that measured anything and we changed the ground before the fifth race to good to soft on the straight course and good to soft, soft in places on the round course.

"It's been a nice drying day, we had a decent breeze and a bit of sunshine. I'm pleased with how the course has taken the rain over the previous two days, as the week goes on it gets a little bit more worn but it seems to be coping with it very well."

And you thought finding the Royal Hunt Cup winner was hard . . . Hussey shines as Iowa mows them down for Ulster Derby success 'Hopefully he's not finished yet' - Rohaan continues his remarkable rise Doyle Force: Creative rider off the mark for the week as Appleby bags a 1-2 'He could be a Guineas/Derby horse' - O'Brien excited by Point Lonsdale What we learned from day four of Royal Ascot