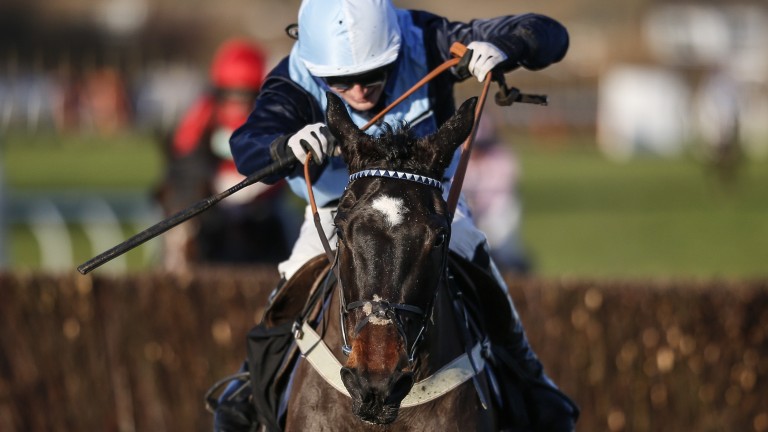 Vinnie Lewis and Harry Bannister on their way to victory in the Sussex National at Plumpton on Sunday
Alan Crowhurst
1 of 1
By Jon Lees UPDATED 6:58PM, JAN 7 2018

Vinnie Lewis defied a stone rise for winning at Sedgefield last time to complete an emphatic victory in the At The Races Sussex National at Plumpton on Sunday.

Trained by Harry Whittington and ridden by Harry Bannister, the seven-year-old confirmed his progressive profile by beating Shanroe Santos and the game mare Frank N Fair to win the prize on his fourth start over fences.

The field went hard all the way, led for much of the race by Leo Luna who finally gave way when Vinnie Lewis, the 7-2 favourite, was sent into the lead at the fourth-last.

He turned into the straight with a clear advantage which Shanroe Santos was unable to cut back as Vinnie Lewis held on by six lengths. Frank N Fair, who was last early, finished seven lengths further back in third with Leo Luna fourth.

Vinnie Lewis won for the first time over fences on his previous start, which he won by 14 lengths and for which he was put up 14lb by the handicapper.

Bannister said after the race: "He jumped so well I didn't want to take him back in a race like that.

"The handicapper gave him plenty for his Sedgefield win and I hope the handicapper doesn't hit him too hard again. He is still a young staying chaser and improving so hopefully can win more nice staying handicaps."

FIRST PUBLISHED 3:04PM, JAN 7 2018
The handicapper gave him plenty for his Sedgefield win and I hope the handicapper doesn't hit him too hard again