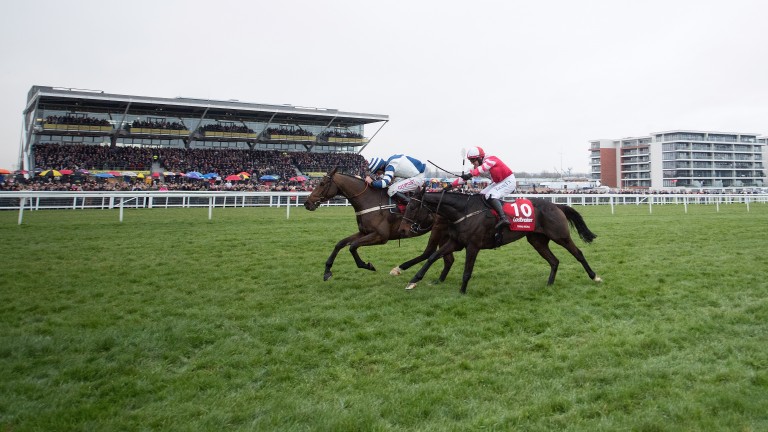 Total Recall and Paul Townend (near side) come with a strong late run to win
Edward Whitaker
1 of 1
By James Burn UPDATED 3:26PM, NOV 22 2019

Willie Mullins' CV does not include the Hennessy Gold Cup, but he took no time in adding the Ladbrokes Trophy to his big-race haul as Total Recall – a horse who was the subject of particularly bullish comments in the trainer's Racing Post column before the race – wore down Whisper in a finish befitting the history of Berkshire's most prestigious jumps contest.

The neck victory of the Slaneyville Syndicate-owned eight-year-old in front of a 16,986-strong crowd also ended Ireland's 37-year winless run in the race that will likely forever be known to some as the Hennessy despite the arrival of Ladbrokes and a prize fund boosted to £250,000.

However,calculating his slice of that pot was the last thing on the 11-time champion Irish jump trainer's mind as he savoured a redemption result dating back to 2002 when Be My Royal struck in the Hennessy only to be disqualified after testing positive for a banned substance caused by contaminated feed.

Time is a great healer and Mullins has not stood still since, becoming an all-conquering jumps superpower and potent operator on the Flat in the meantime, but it was clear what Total Recall's gutsy success under Paul Townend – who got a four-day whip ban for misuse of the whip – meant to him.

He said: "It's a race any jumps trainer wants to win – a fantastic race and I'm very happy to win it, but we've just go to hold on to it this time!

"It was very disappointing at the time to lose it, but hopefully that's laid to rest. Anytime you can win a big race like – the second biggest jumps handicap in Britain – makes us very happy, and we're very happy to win it for these owners as well. They have a couple more with us and they enjoy days like this." 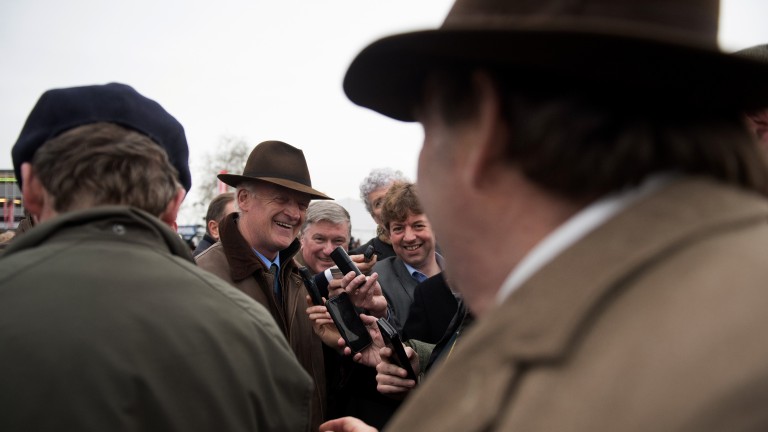 They could be in store for a few more thrills according to Mullins, who praised Total Recall's now-retired former trainer Sandra Hughes and suggested Graded races, not handicaps, might be the future for October's Munster National winner.

"We didn't think about this race at all until we started working him and then we realised we had something that needed a trip and his handicap mark over a shorter distance was going to be generous over a longer trip," added Mullins, who thought he was booked for second when Whisper assumed control three out.

"The horse was very cool and Paul was very cool, but I wouldn't think the trainer was watching it! We thought he was going well until the second-last and then it fell apart a bit, but Paul pulled him back and got him balanced to challenge up the inside. Changing tactics probably helped him. I thought we were second until the last 100 yards when he just wore him down.

"I'd like to compliment Sandra Hughes who brought this horse on in the style of her father Dessie.

"She minded him and didn't put him over a longer trip to spoil him. When she retired I was lucky enough to get him. I imagine Sandra would have gone down the Irish Grand National route and probably won that with him!

"I don't know what we'll do. It's fantastic to win that and we'll look at more handicaps, but we have to wonder if he's better than that." 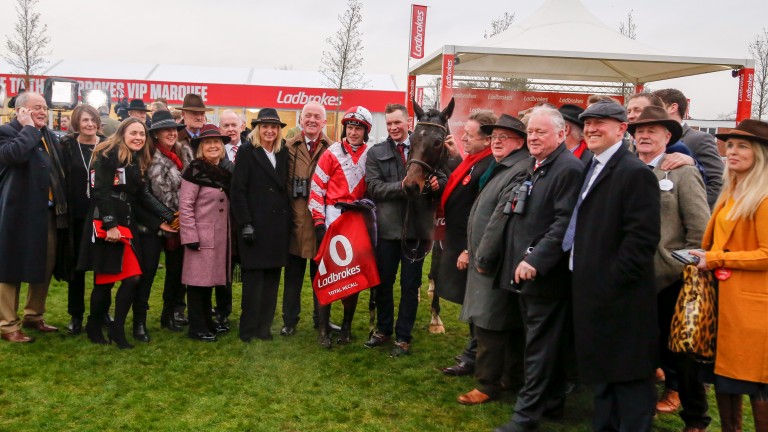 Mullins said Total Recall would be entered in the Timico Cheltenham Gold Cup, for which he is now a general 25-1.

Standing in for the stable's main jockey Ruby Walsh, who broke his leg last month, Townend, suspended between December 16 and 19, is happy to wait and see how the son of Westerner progresses.

Celebrating his first win in the race, the 27-year-old said: "It's hard to wear down Davy – I know that from home – but I knew I hadn't gone for everything yet and it was just a matter of how quick I was going to get going and whether it was going to be in time.

"It's a dream to win any race like this. I suppose the race owed Willie one, but it doesn't always work out like that. There are a couple of races like this in the calendar that are steeped in history and brilliant to win."

FIRST PUBLISHED 7:00AM, NOV 30 2018
I'd like to compliment Sandra Hughes who brought this horse on in the style of her father