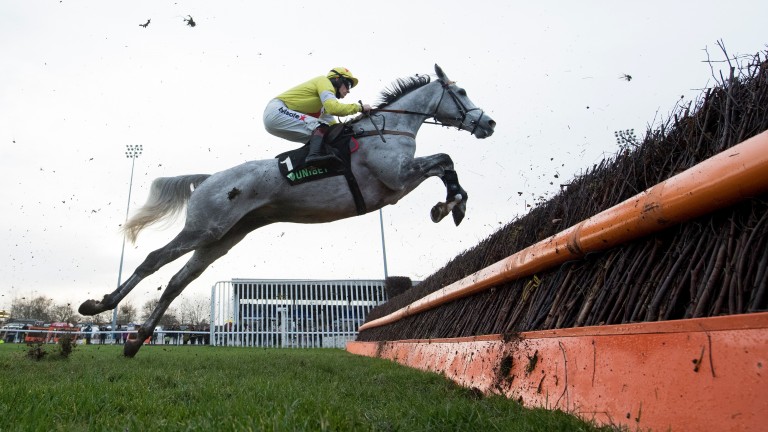 Politologue and Sam Twiston-Davies show jumping is the name of the game on his way to saluting another great grey Desert Orchid in the Grade 2 Chase named after him at Kempton
Edward Whitaker
1 of 1
By Jon Lees UPDATED 9:45AM, DEC 29 2017

With five Champion Chase victories to his name, Paul Nicholls could compile a book on the best routes to Cheltenham. And on Wednesday he opened a fresh chapter when Politologue, the horse he hopes can follow in the footsteps of Call Equiname, Azertyuiop, Master Minded and Dodging Bullets, opened up a new path after taking the Unibet Desert Orchid Chase.

Nicholls' only previous win in the Grade 2 race had come with Sanctuaire, who finished fourth behind Sprinter Sacre in the 2013 Champion Chase, but the trainer warned there was better still to come from Politologue, who made it three from three in open chasing in the £90,000 event.

His task was made easier by the first career fall of two-time race winner Special Tiara. Left in front when the reigning Champion Chase winner came down when leading five out, Politologue cleared the remaining fences without any alarms to beat Vaniteux by 13 lengths, giving Sam Twiston-Davies his first winner since returning from injury.

"That's job done for us now because it means I can give him a little holiday," said Nicholls.

"I've been quite hard on him, peaked him for the Tingle Creek and ticked him over for today. He will have a break and we will do the same thing, use the Game Spirit a bit like the Haldon Gold Cup and get him at his very best for Cheltenham."

Nicholls had planned to wait for the Clarence House Chase at Ascot with Politologue but explained, "I hadn't realised John [Hales, owner] is away and had I carried on for three more weeks I would have had to try to get a break in somewhere and if he missed Ascot we could have been in a bit of trouble. I'm trying to go to Cheltenham the easiest route possible."

He slowed markedly after the last without being in any danger of being caught and Nicholls  added: "The worst thing is the moment he is in front he doesn't do a tap. In the better race they go flat out and he can get a lead. I can't wait for the spring with him. I know how to get him at his best.

"Kauto won the Denman Chase by a head one day and I knew he had so much improvement to come for Cheltenham. You have to get them to that optimum for one race and that is where we are going to get him on Champion Chase day.

"He is a young horse and you saw with Black Corton that all they do is keep progressing. He reminds me a lot of Master Minded, a staying two-mile chaser. Whether he will ever reach that level I don't know but he is going the right way. He compares favourably with a lot of them."

Special Tiara, who turns 11 in January, was up quickly from his fall and ridden back by Noel Fehily.

"He struggles on that ground, so you're always trying to use his jumping," said the jockey. "To be fair, when you go that fast, sooner or later you're going to make a mistake."