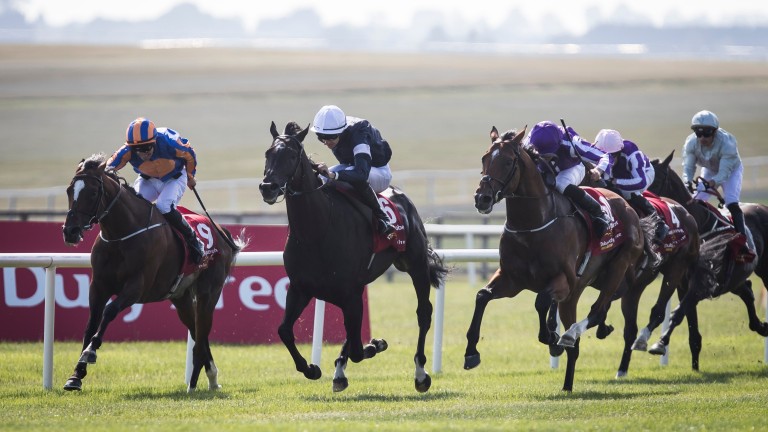 Latrobe (centre): fends off the challenge of Saxon Warrior (right) and Rostropovich at the Curragh
Patrick McCann
1 of 1
By Tony O'Hehir UPDATED 7:18PM, JUN 30 2018

Like father like sons. The O'Brien brothers, Joseph and Donnacha, notched a first Irish Classic success as Latrobe, who won a maiden at the course last time out, held off Rostropovich and Saxon Warrior, both trained by their father, Aidan, in a rousing finish to the Dubai Duty Free Irish Derby.

Joseph, for whom Saturday's success was a first Classic as a trainer, had won the Irish Derby as a jockey on Camelot, sire of Latrobe, in 2012 and on Australia in 2014.

The winning trainer's brother, Donnacha, who will be 20 later this month, rode Latrobe and was winning his first Irish Classic to go with his victories on Saxon Warrior in the Qipco 2,000 Guineas and Forever Together in the Investec Oaks this year. 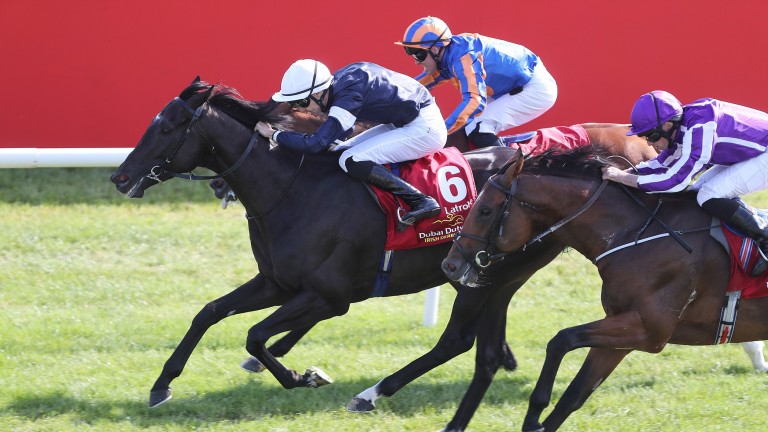 In a race that favoured those who raced prominently, O'Brien had Latrobe in a stalking position throughout and pounced when pacemaker Rostropovich came under pressure two furlongs out

However, the 14-1 shot came under renewed pressure from Rostropovich inside the final furlong but battled on for a half length win, with even-money favourite Saxon Warrior a neck back in third.

The son of Camelot, who is owned by Melbourne Cup winner Rekindling's owner Lloyd Williams, took a big step up on his previous form but was always held in high regard by connections.

Aidan O'Brien, trainer of the second and third, spoke about his sons' performances by saying: "It was incredible. It's one of those special days. What can I say.

"It's so tough and it's so competitive and the two lads [Donnacha and Joseph] work so hard day-in day-out. It was so special and I was hoping all the way up the straight we wouldn't chin them. I'd have hated if he was second and we chinned him on the line." 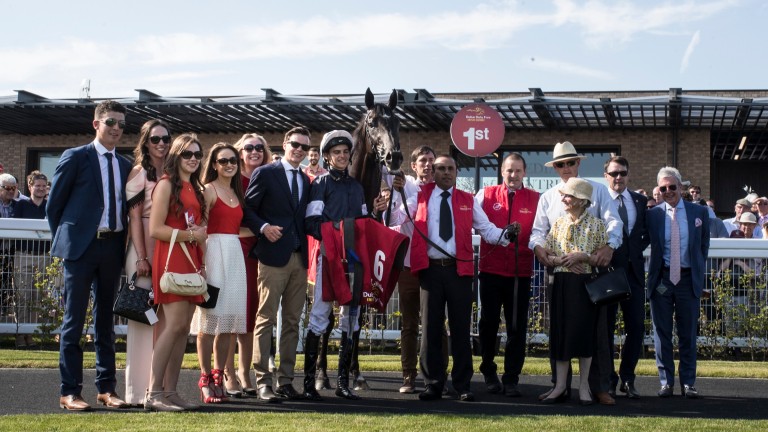 Connections with Latrobe in the winner's enclosure
Patrick McCann

"We try and win every race and everyone does but it's a tough game and they're so grateful to everyone who supports them."

Latrobe, who has plenty of options ahead, was entered at 5-1 for the St Leger, 20-1 for the Arc and shortened to 25 (from 50) for the Melbourne Cup by Betfair. Ladbrokes and Paddy Power go 16-1 for the Arc.

Joseph O'Brien, 25, said: "It's unbelievable and it hasn't sunk in yet. The plan was to drop Latrobe in but there was pace on early and Donnacha found himself racing prominently. He had a good position and when committed he Latrobe the horse showed he was very good, tough and honest.

"Today was plan A and we'll let the dust settle before deciding where he'll go next. I'll talk to Lloyd and Nick (Williams) and we'll see what they want to do."

O'Brien, who was a guest presenter during RTE television's coverage of the meeting, added: "A lot of credit for today must go to my staff, especially Azhar Khan who looks after Latrobe and also Joey Fallon who rides him out every day."

The winning rider said: "It's an incredible feeling, a very special moment, to have won an Irish Derby. The race didn't go to plan as I found myself more forward early in the race than I wanted, but it all worked well in the end."

Drop in trip the plan

Saxon Warrior is to be dropped back in trip, according to Aidan O'Brien who said: "We gave him another shot at a mile and a half and he's run a really good race, much better than he ran at Epsom.

"We've no definite plan in mind for him just yet but we will be dropping him to a mile and a quarter. Rostropovich also ran a smashing race and got the trip well."

Dee Ex Bee, the Investec Derby runner-up, could finish only seventh. The writing was on the wall for the Mark Johnston-trained colt on the final bend, when he was being scrubbed along by Silvestre de Sousa.

FIRST PUBLISHED 5:27PM, JUN 30 2018
It was so special and I was hoping all the way up the straight we wouldn't chin them