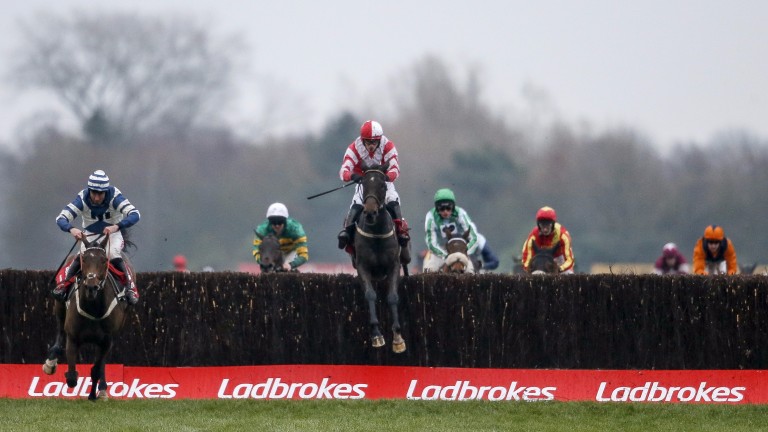 Whisper lands in front of Total Recall at the last in the Ladbrokes Trophy
Alan Crowhurst
1 of 1
By Lewis Porteous UPDATED 7:42PM, DEC 2 2017

Weight again stopped a train at Newbury yesterday, with the stone in lead Whisper tried so valiantly to concede to Total Recall in the Ladbrokes Trophy enough to derail the Nicky Henderson express.

The run from the last fence at Newbury stretches a shade over a furlong but for connections of Whisper it must have felt more like a mile as they first watched him scamper away from the final jump with one of racing’s most prestigious chases within his grasp, only for the 11st 8lb on his back to weigh heavy as the post loomed and the hard-ridden Total Recall nip up his inner to clinch glory.

Agonisingly for Henderson and Whisper’s owner Dai Walters, victory in a two-runner graduation chase at Kempton on November 13 had lumbered their nine-year-old with a 4lb penalty and both trainer and owner were in no doubt that had been the deciding factor in the end.

“What a good old warrior he is, it’s just that clown Henderson went and gave him a 4lb penalty,” said the trainer, placing the blame solely on his own shoulders.

He added: “I always thought there weren’t penalties for this. Still, he’s done nothing wrong and was given the most perfect ride – he was always in the right place. He’s only just out of novice status but it was a great try.”

Newbury’s long-standing clerk of the course Richard Osgood confirmed there had been no recent changes to the conditions of the race formerly known as the Hennessy as far as he was aware. 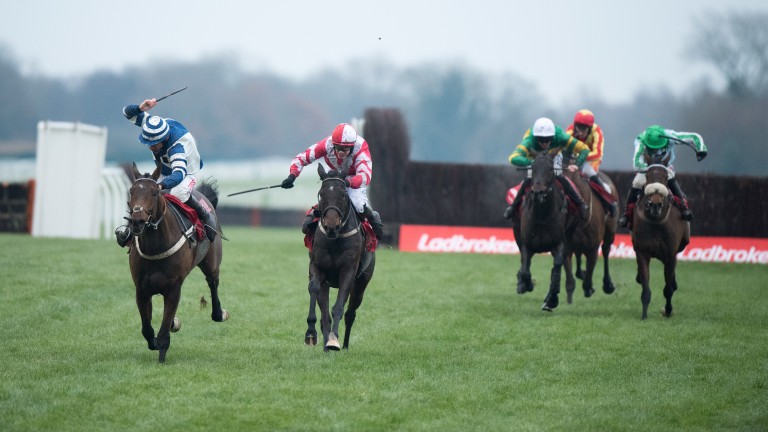 Some pointed to the fact Smad Place had won the same graduation chase at Kempton but escaped a penalty when winning at Newbury in 2015 but the eagle eyed will have spotted the Kempton race two years ago was run three days before the November 5 date when winning penalties for the Ladbrokes Trophy were enforced this year.

“The 4lb penalty cost him the race,” said Walters, who was nevertheless still smiling. “Weight will stop a train – there was 14lb difference in it, but he didn’t put a foot wrong.”

Walters deflected any talk that he perhaps has a credible Cheltenham Gold Cup contender on his hands now, and all that Henderson would commit to was that Whisper and stablemate Might Bite would not be clashing anytime soon.

“We’ll want to spread his races out,” said the trainer. “Kempton brought him on tons, it’s just a shame about the penalty. We’ll have to sit down and think about it; Dai will probably find a nice little conditions race at Ffos Las!”

If it is any consolation to Henderson, Whisper’s rider Davy Russell waxed lyrical about the champion trainer, astounded at the improvement he had nurtured from last year’s RSA chase runner-up.

“A stone is a lot in that ground but credit to Nicky Henderson, he’s as good as I’ve ridden for,” said Russell. “Unbelievably for a nine-year-old, Whisper felt better than last year; he’s a great horse. I knew Paul Townend [rider of Total Recall] was there and I was just trying to get him off the bridle.”

Time may tell Whisper was facing an impossible task trying to give any weight away to a horse Willie Mullins clearly rates very highly but for Henderson and Walters, 4lb was the deciding factor.

FIRST PUBLISHED 5:59PM, DEC 2 2017
What a good old warrior he is, it’s just that clown Henderson went and gave him a 4lb penalty