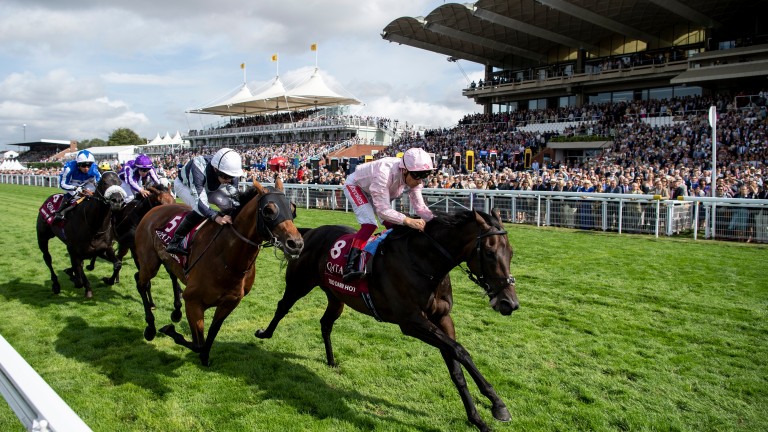 Saturday's epic King George success for Enable may have sent pulses racing around the world but for John Gosden and Frankie Dettori it was an experience that left them physically and emotionally drained.

Yet just four days later and with the Goodwood Cup safely returned to the Clarehaven trophy cabinet, the duo were back in fighting form after a victory that was clearly as satisfying as it was decisive for last year's champion juvenile Too Darn Hot in the £1 million Qatar Sussex Stakes.

Saturday's celebrations consisted only of a "TV dinner" according to Gosden but there may well have been something a little more raucous planned for Wednesday evening having proved once and for all Too Darn Hot had lost none of last year's spark.

While on Saturday Gosden was a little critical of Dettori committing so early aboard Enable at Ascot, the instructions to "stay cool and wait for a gap" could not have been clearer this time and Dettori followed his orders to the letter, biding his time in an uncomfortable pocket before unleashing Too Darn Hot with a burst of speed that took him past Circus Maximus and on to a third Group 1 success.

"I was drawn on the inside and it was obvious they wanted to test my stamina," relived Dettori. "John said 'don't panic and wait for the split' and I had no other choice. When Zabeel Prince fell backwards I managed to pull him out and he was full of running. Once he got into top gear I knew it was over."

The day may have revolved around restoring Too Darn Hot's reputation but Dettori and Gosden spoke of the intensity and hard-hitting impact of Saturday's King George, which left both men jaded.

Dettori said: "I was waiting for Too Darn Hot to come into the paddock and I said to John 'I'll probably need a heart transplant by the end of the week'. He said 'shut up, you love it' and he's probably right." 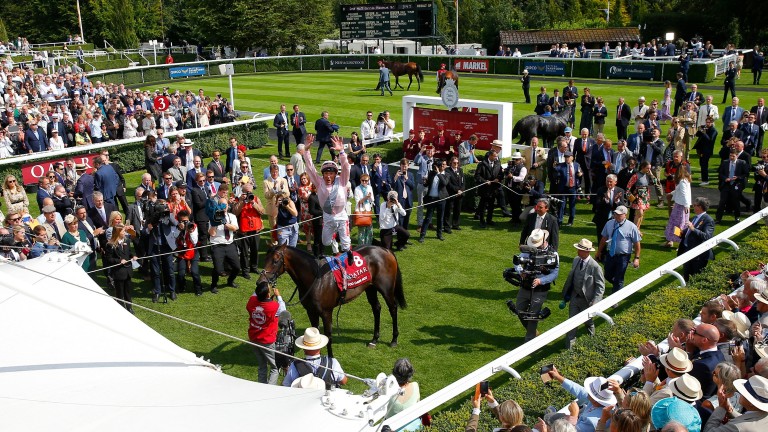 Gosden continued: "After Enable Frankie went home exhausted and we all sat there and had a TV dinner, which was rather sad. We were completely bottomed out emotionally and for Frankie physically. He's not a kid anymore but if we keep him going to the right meetings we might get a few more years out of the old boy."

Never mind next year and beyond, exciting plans for Too Darn Hot await this season with Gosden tantalisingly leaving the door ajar for him to try his luck at sprinting, although sticking at a mile seems the most likely route to his swansong in America.

"We'll look at the mile races but I wouldn't be frightened running him on Champions Day in the Sprint," said the trainer. "What caught him out earlier in the season was the stiff mile at the Curragh and the round mile at Ascot, which rises a long way. He's an out-and-out speed horse – he was a champion two-year-old and is all speed."

He added: "We know there's the Moulin and the QEII but the race I'm really toying with in my mind is the Breeders' Cup Mile. A seven-furlong horse loves that mile and I'd be probably working back from that."

Owners Lord and Lady Lloyd-Webber missed the race in favour of the Salzburg music festival but that did not stop Gosden cursing the winner's bad luck and, not for the first time, his own poor race planning at the start of the season.

"He missed the Greenham and missed the Guineas [with injury] which I think he would have won," he said. "It's sad but he did and then, being honest, we got it completely wrong running in the Dante – that's not the horse's trip.

"Then we rushed him back nine days later to run him in Ireland, which was stupid. The horse has fortunately overcome both his manager and his trainer. He proved that being champion juvenile last year was no fluke and it's great to come here and win an all-age race like the Sussex."

Circus Maximus, the horse who beat Too Darn Hot in the St James's Palace Stakes, could not match the winner's kick on this occasion but justified his £70,000 supplementary fee with a cheque for £225,000 for finishing second.

"Ascot is a tougher track than Goodwood but we were delighted," said his trainer Aidan O'Brien. "He could stay at a mile but we know he stays a mile and a quarter. The next race to come along is at York [Juddmonte International], so it's a case of do we go back up in trip there or think of something else?"

For good measure O'Brien picked up an extra £113,000 with third-home I Can Fly although, not for the first time this year, he was left playing second fiddle to a trainer and jockey enjoying the season of their lives.

FIRST PUBLISHED 6:42PM, JUL 31 2019
I wouldn't be frightened running him on Champions Day in the Sprint. He's an out-and-out speed horse - he was a champion two-year-old and is all speed