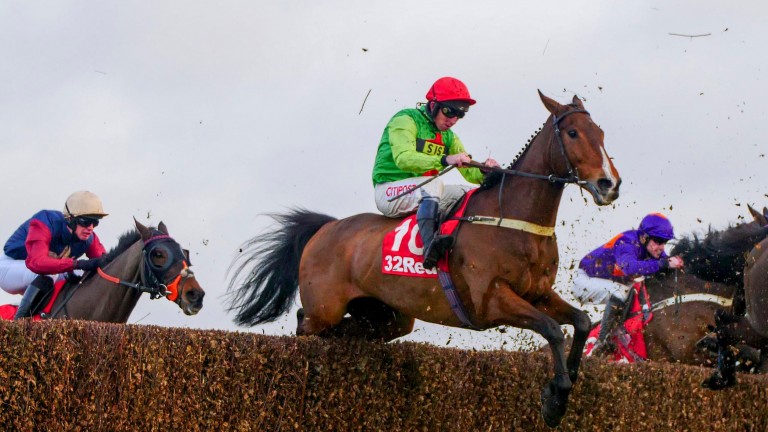 Buywise and Leighton Aspell on their way to winning at Sandown on Saturday
Mark Cranham / racingpost.com/photos
1 of 1
By Tony McFadden UPDATED 5:01PM, JAN 6 2018

Punters with deep pockets and a forgiving disposition were well rewarded as the mercurial Buywise came with a power-packed late run under Leighton Aspell to overhaul 14-year-old Pete The Feat in the £100,000 32Red Veterans' Handicap Chase, finally bagging the big prize his talent had suggested was possible but his tendency to uproot a fence had made seem unlikely.

Like many of the 14 participants in the final of this much-heralded series for older horses which was worth double the Grade 1 Tolworth Hurdle, Buywise had gained a cult following – though presumably not with the Cheltenham groundstaff responsible for rebuilding the fences he had made a habit of bulldozing over the years.

But Leighton Aspell, riding the 11-year-old for the first time, conjured a much better round than usual, which proved decisive.

"I really enjoyed it," said Aspell. "I just kept hunting away as there was always going to be a strong pace and he had that bit of class to travel and jump, so I was able to pick my way through the field.

"He's run in all of the top handicaps over the years and has made mistakes at the wrong time before running on late. He's been an unlucky horse."

No horse has made the futile late charge their trademark quite like Buywise, who was without a win in nearly three years and whose place earnings had dwarfed his winnings courtesy of a series of near-misses in valuable handicaps.

But on this occasion his relatively proficient jumping ensured he was close enough for his traditional late charge to carry him to victory, passing last year's winner Pete The Feat on the run-in to win by two lengths, with a further three lengths back to Gas Line Boy in third.

Trainer Evan Williams, who was at Chepstow's Welsh Grand National meeting, said: "I'm delighted and it was tremendous to see the old horse win – it was heartwarming.

"People wouldn't believe the following Buywise has, we get messages from people all over, so to see him win means a lot.

"Leighton is a very good fella and very good horseman. They tell me he hasn't ridden a winner for a long time, but I said not to worry about that as he's exceptional."

Aspell, twice a winner of the Grand National, had gone 35 days without a winner prior to coaxing the best out of Buywise, but the losing run hadn't played on his mind.

He said: "I'm 41 now, so it's not the first time I've gone a month without a winner – it won't be the last either. If I wasn't getting rides I'd have been concerned but I had plenty of rides and you know that a winner is just around the corner."

Plenty of Buywise's backers had long-since given up dreaming that big win was just around the corner, but who could begrudge such an enigmatic veteran his day in the sun?

Record-breaking veteran Megalala could yet race on at 17

FIRST PUBLISHED 3:23PM, JAN 6 2018
You obviously have it in the back of your mind, you've seen him in all those races at Cheltenham and he lost a few with mistakes