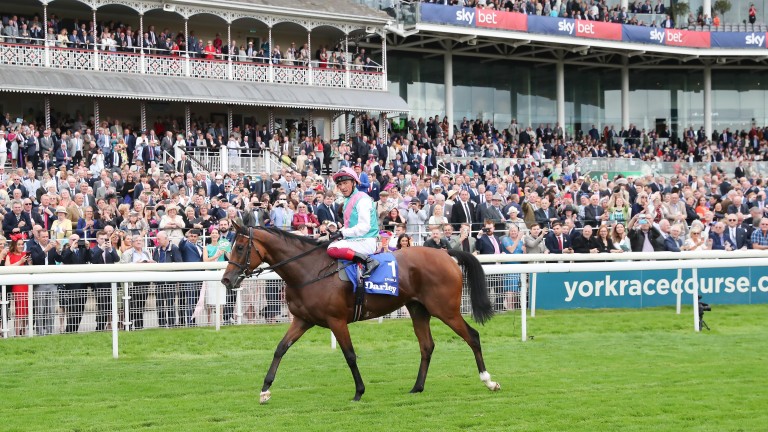 Racing royalty Enable enjoyed the perfect Arc aperitif and enhanced her reputation as one of the best mares in history with a terrific tenth top-level success in the Yorkshire Oaks.

Little more than six weeks before a historic hat-trick bid in the Qatar Prix de l’Arc de Triomphe, the John Gosden-trained Enable turned on the style in her inimitable way to defeat the world’s top-rated filly Magical on what is likely to be her final start on British soil.

Gosden's attention immediately turned to the task of readying Enable for a final French foray on October 6, when she will bid to go one better than dual winner Treve, whose quest for a third Arc was thwarted in 2015 when she finished fourth behind Golden Horn.

Sky Bet shortened Enable to a best price evens (from 11-10) to win the Arc with a host of firms going as short as 4-5.

Under a largely hands-and-heels ride from Frankie Dettori, Enable achieved her joint-third highest Racing Post Rating of 127 in accounting for Magical by two and three-quarter lengths, with Gosden hopeful Khalid Abdullah's mare will be “mighty tough” to beat if she is at the peak of her powers at Longchamp. 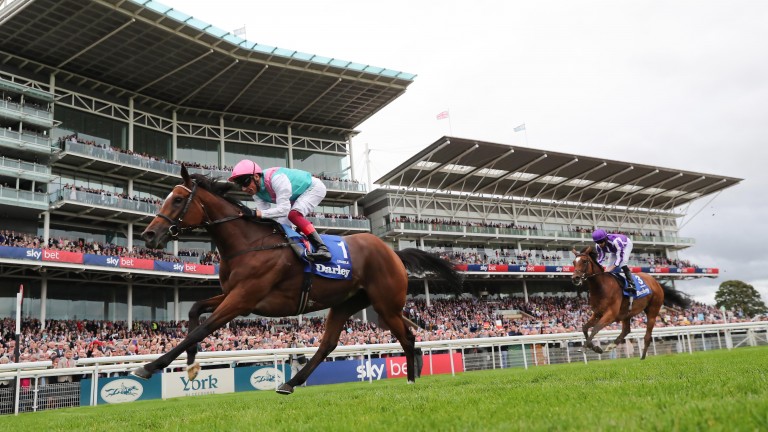 Enable staying on well at York under Frankie Dettori
GROSSICK RACING
Gosden said: “She wasn’t at her best in the Arc last year but if she goes back to the form she showed when she won the race at three, which she looked like she was showing today, then she’ll be mighty tough to beat.

“You always have to watch out for the three-year-olds. Sottsass and Japan were brilliant recently and they're the ones we’ll have to watch as they will be getting the weight.

“Enable has this amazingly competitive mind and a wonderful constitution. The only time she was beaten was when she was boxed in, but that’s life. She’s a wonderful racemare.”

It was a fourth triumph in the Yorkshire Oaks for Gosden. For Enable, it was a second win in three years in a race won in 2018 by the ill-fated Sea Of Class, who pushed Enable closest to defeat during her 12-race winning run when a short-neck second in last year’s Arc.

Gosden said: “It was a gorgeous performance. She cruised around and really quickened. She really turned it on and Frankie [Dettori] was not hard on her.”

On returning to a heaving winner’s enclosure, Dettori applauded the crowd as the crowd applauded him and his star mare. A brief look to the skies preceded the famous flying dismount.

Dettori, with tears in his eyes, said: “I love her so much. I haven’t lost with her yet and we’ve won everything.

“She’s amazing, uncomplicated, has great presence and a massive engine. Everybody doubts her but she just keeps on winning."

Enable did it the hard way by making all but it looked anything but. Dettori peered between his legs on the turn into the home straight, and again half a mile out. When Magical and stablemate Lah Ti Dar came within a length, Enable went into another gear.

There was ten lengths back to third Lah Ti Dar at the finish and a further length and a half to Ballydoyle's second string South Sea Pearl, but all the attention deservedly went the way of the winner.

Dettori said: "I let Magical come to me and when I kicked she put it to bed. Magical is no slouch but Enable felt tremendous.

“We wanted to do an exercise canter with the Arc in mind but having Magical here made a race of it as she’s very solid. She had a very hard race in the King George so this was a fantastic performance.”

In winning a tenth top-level prize, Enable matched the tally of fellow Juddmonte great Frankel, who wowed the adoring York crowd when winning at this meeting on his penultimate start in 2012.

Teddy Grimthorpe, racing manager to Abdullah and chairman at York, said: “The Yorkshire crowd is fantastic and so knowledgeable – it’s so vital for racing to have these stars. The way she performs every time is something else. Everyone is so proud of her.”

It was not just racegoers who were left in awe with Aidan O’Brien – trainer of runner-up Magical who drifted to 20-1 (from 12) for the Arc with Sky Bet – providing a fitting description of Enable.

O’Brien said: “Enable was unbelievable. We have a lot of options with Magical. We’ll see how she is when we get her back but she might go to Leopardstown next month.”

The Irish Champion Stakes or Matron Stakes may well await for O’Brien’s leading filly but there is surely only one magical ending for Enable. Roll on Longchamp.

FIRST PUBLISHED 3:41PM, AUG 22 2019
The only time she was beaten was when she was boxed in, but that's life. She's a wonderful racemare