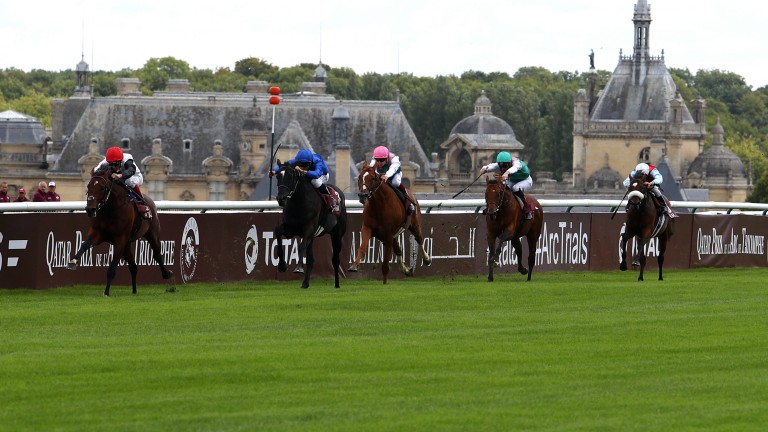 Cracksman sprints clear of the Prix Niel field under Frankie Dettori at Chantilly but a return trip for the Arc is by no means certain
Scoopdyga
1 of 1
By Scott Burton UPDATED 9:32AM, SEP 11 2017

Cracksman passed his Arc audition with flying colours at Chantilly on Sunday – but his backers could be made to wait until only a few days before Europe’s richest race to discover whether he will line up on October 1.

Moments after Cracksman had passed the post an easy three and a half lengths clear of Avilius for a bloodless win in the Prix Niel, owner-breeder Anthony Oppenheimer was in no mood to change his long-held opinion the colt should be put away and preserved before taking on Europe’s best at four.

However, Oppenheimer stressed it would be trainer John Gosden – absent for the Keeneland Yearling sales in Kentucky – who would make the final decision.

Oppenheimer knows the joys of winning the Arc having scaled that particular peak only two years ago with Golden Horn, and his latest flagbearer is now generally second favourite for the Qatar-sponsored €5 million showpiece at between 5-1 and 10-1.

Frankie Dettori, who rode Cracksman here, is committed to partner stablemate and Arc favourite Enable at Chantilly next month, which will also be a factor in the decision about whether to run Cracksman.

Oppenheimer said: "The options are the Arc or the Champion Stakes but we would prefer to put him away next year without a hard race. We think if we give him a hard race this year it may just take the sting out of him for next year. And there's only one Frankie."

Pressed as to whether the decision might not come until the week leading up to the Arc, he added: "I’ve no idea what Mr Gosden is going to do. I think he might do that [wait till final declarations]. If Enable wasn’t able to run for some reason then it might change his plans."

Dettori, already a four-time Arc winner, said: "It wasn't a particularly strong race but it went the way I expected, even though the ground is a bit too soft for him.

"I don't know if he'll run in the Arc but I expect to be on Enable. At this stage she's stronger and more streetwise than him."

Most people present expected the other main Arc clues to come in the Prix Foy but the nationality of the challenge might have caught a few by surprise, as the German-trained Dschingis Secret ran out a fine winner and Japan’s great hope Satono Diamond was only fourth.

This year's Deutsche Derby-winning trainer Markus Klug was not here to see his biggest success outside Germany but connections have made no secret of the fact they believe their four-year-old will be worthy of a place in the Arc, granted a repeat of these favourable soft conditions.

"I didn’t get any cover but I wasn’t worried because he travelled very sweetly and didn’t pull at all,” said jockey Adrie de Vries. “I waited because I knew I had a lot of horse and he just loves this ground."

Dschingis Secret was last seen beating Hawkbill in a Berlin Group 1, and De Vries believes his partner – who was cut to 12-1 (from 33) by Sky Bet for the Arc – has come on again.

"He was even better than last time," said De Vries. "I'd think he can be among them in the Arc. He did it pretty well and I gave him only two slaps. It was over pretty quickly."

Cloth Of Stars ran a very pleasing comeback on his first start since May’s Prix Ganay and looks sure to head for the Arc to attempt the same feat as trainer Andre Fabre performed with Subotica, who won the race in 1992 after being beaten in the Foy.

No Arc for Vermeille ace Bateel

The Vermeille had the biggest field of the three Arc trials but seemed beforehand to have much less relevance.

In beating gallant Gosden raider Journey by two and a half lengths, Bateel appeared to have thrust herself into contention for being supplemented to the Arc, but while trainer Francis Graffard did not rule it out, owner Al Asayl Bloodstock's manager John Peter-Hoblyn said: “The Prix Royal-Oak could be a possibility. The Arc is definitely not on the radar for her.”

Connections had an anxious wait for nearly half an hour, a stewards' inquiry having been called after the four-year-old had been involved in squeezing the Andrew Balding-trained Blond Me – subsequently eased down and last home – rounding the final turn into the home straight.

"She’s a bit of a character and we’ve worked hard with her since she joined us,” said Graffard.

“The ground was ideal for her today, and she came into this in very good form. Bateel is entered in the Fillies’ & Mares’ at Ascot, which could be a possibility, but the decision is also ground dependent as this is the firmest she would want it."

Winning rider Pierre-Charles Boudot received a four-day suspension after the stewards adjudged he had not done his best to stop his mount from moving over to the rail rounding the final turn.

FIRST PUBLISHED 2:05PM, SEP 10 2017
I don't know if he will run in the Arc but I expect to be on Enable. At this stage she is stronger and more streetwise than him