Triumph favourite Apple's Shakira does the business with smooth success 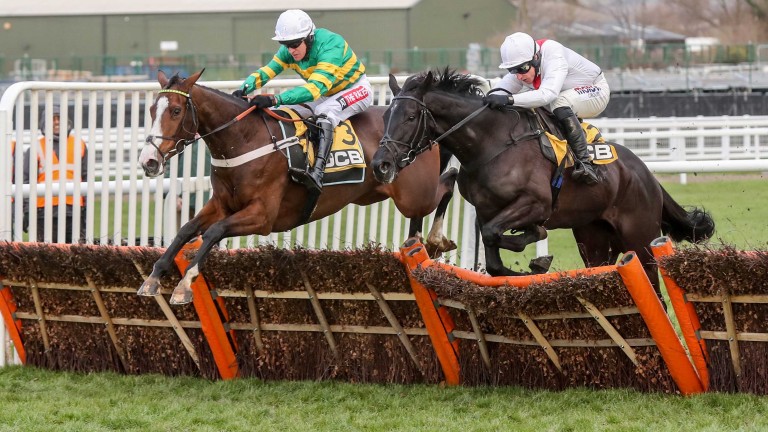 Apple's Shakira delivered a performance befitting her prohibitive 1-10 odds when making light work of her three opponents for another easy victory.

The Triumph Hurdle favourite did not win by as wide a margin as her debut for Nicky Henderson at the track last month, but ultimately was a cut above when pulling clear of Nube Negra.

Knight Destroyer took the field along before weakening at the top of the straight, and although Nube Negra came through with Apple's Shakira, he was unable to live with the winner through the final stages.

Apple's Shakira scored by three and a half lengths, and bookmakers generally left her unchanged for the Triumph, although Betfred and BoyleSports cut her to 3-1 (from 4).

Henderson is keen to get more races into the filly, and would also like her to face a bigger field, as he said: "A little bit more cover would probably help. She was a little but keener today and she's woken up quite a bit at home since her first run.

"She's going the right way but there's long way to go and it's a long time until March.

"I'll certainly want to run her again. She's only had three races in her whole life. I'd like to see her in a bigger field where you could put her to sleep a little more and let her do some racing. You aren't learning a huge amount doing that and come March it will be more competitive."

Jockey Barry Geraghty added: "She was wanting to get on with the job. She did what she had to do."

Fehily rewarded after waiting with Kalondra

The outsider of the four runners for the 2m5f novice chase, although the highest-rated, Kalondra came with a perfectly timed challenge to make it two wins from three starts over fences.

Jockey Noel Fehily was happy to sit at the back of the field for the majority of the race, before unleashing Neil Mulholland's six-year-old late in the piece.

The waiting tactics paid off as Kalondra stormed up the hill to claim victory at 10-1. There was also late drama as Jameson, who had taken the field along, collided with the running rail on the run-in, although the horse and jockey Davy Russell were unscathed.

Fehily said: "He jumped a bit careful early but once he warmed up he jumped brilliant the second half of the race. He's a decent horse and is definitely on the up. Hopefully we can target some better races in the spring."

The best live reports on racingpost.com