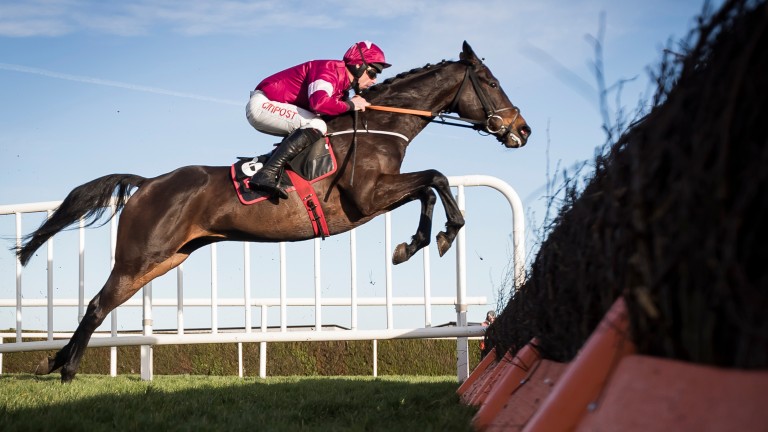 Apple's Jade and Davy Russell on their way to victory in the Squared Financial Christmas Hurdle
Patrick McCann
1 of 1
By Brian Sheerin UPDATED 3:50PM, DEC 28 2017

Nichols Canyon, last season’s Stayers’ Hurdle hero and an eight-time Grade 1 winner, was reported to have suffered a fatal shoulder injury after coming down at the last hurdle before the stands with a circuit left to race.

With the final flight being omitted, Supasundae and Robbie Power rounded the home turn and passed what should have been the last seemingly going better than Apple’s Jade.

But if there’s one thing we know about Elliott’s super mare it is that she relishes a battle, and Davy Russell, riding Apple’s Jade for the first time, galvanised his mount in the closing stages to run out a half-length winner in what was her first victory over three miles.

Russell said after the race: “The extra distance didn’t do her any harm. I wasn’t a bit surprised that Supasundae gave her a good race, but I’m just happy I came out on the right side.”

He added: “It’s just a pleasure to be riding those high quality horses and I’m just happy to have been given the opportunity to ride her.”

Apple’s Jade had never raced beyond 2m4f before this success and, while the victory would have appeared to open up more options for the future, Michael O’Leary said afterwards that the Mares’ Hurdle would remain at the forefront of Gigginstown’s plans.

Reflecting on the performance, he said: “She was terrific and to be fair Jessie’s horse [Supasundae] really put it up to her.

“It was a very good race with two very good horses fighting out the finish and it was a great training performance from Gordon.”

He added: “The plan I suspect is still the Mares’ Hurdle at Cheltenham, but I hate worrying about future plans and just want to enjoy these big Grade 1 wins, especially with what happened to Nichols Canyon yesterday.

“We’re delighted to see her winning over three miles, but I’d imagine Gordon’s plan will remain the Mares’ Hurdle.”

Elliott, who described Apple’s Jade as a “bull” after the success, added: “She just loves a battle. Davy said that if he was to ride the race again, he would have gotten into a battle earlier as she just loves it.

“She’s as tough as old boots – to think she’s only five years of age and that’s her seventh Grade 1 win, it’s great isn’t it.

“Even the way she won at Cheltenham last year, she always grinds it out and she’s a fighter. She’s even like that in her work at home and she has to be out in front. She’s a bull!”