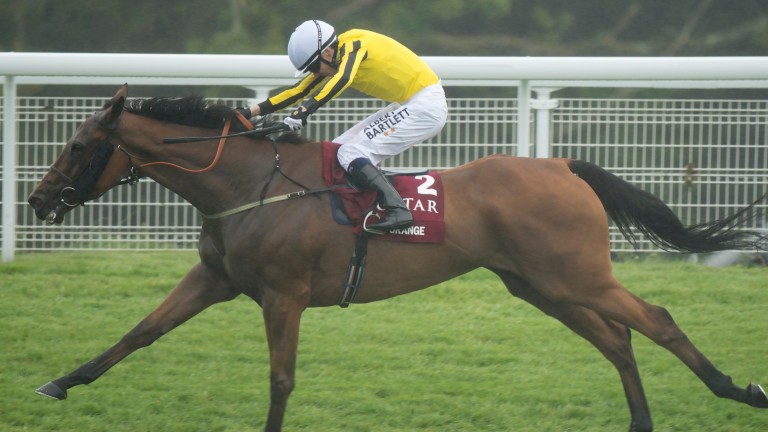 A prestigious event which includes staying greats Persian Punch (a three-times winner), Double Trigger and Ardross among its roll of honour.

Big Orange, who showed his versatility by landing two Group 2 events in July last year, the Princess of Wales’s Stakes over a mile and a half at Newmarket and the 2m Goodwood Cup by a battling length and a quarter from Pallasator, appears favoured by the race conditions.

He made a pleasing seasonal reappearance when fourth to Vazirabad in the 2m Dubai Gold Cup at Meydan in March and looks the one to beat in receipt of 7lb from his old rival Quest For More.

Mick Channon’s seven-year-old Elidor, the mount of table-topping Silvestre de Sousa, may have more miles on his clock than some, but remains unexposed at staying trips and there could be improvement to come on only his second attempt at 2m.

Six of the seven runners hold entries in the Gold Cup at Royal Ascot, the exception being Vent De Force who won this race two years ago.

Vent De Force is the sole course winner, having already struck twice at the Esher venue. He was last seen in the Ebor at York last August when finishing down the field behind Heartbreak City.

Roger Charlton, trainer of Quest For More
I'm pleased that the ground is drying out. He's in very good form, but has to concede the Group 1 penalty to all his rivals, including his old friend Big Orange. It's not going to be easy giving 7lb, but this looks a good prep for the Gold Cup.

Michael Bell, trainer of Big Orange
On ratings it looks a very good opportunity for him. He looks very well in himself and the drying ground will suit.

Mick Channon, trainer of Elidor
I'm very happy with him. He came out of his Nottingham race well and goes to Sandown in great form. He's been a good horse all his life. He finished second in the Lingfield Derby Trial and was third in the Ebor, but if we can get him settled I think there's more to come from him at two miles.

James Fanshawe, trainer of Higher Power
He's improved for the step up to two miles. He has a bit to find with Big Orange and Quest For More, but seems in good form. I hope it doesn’t dry out too much.

Hughie Morrison, trainer of Vent De Force
We declared him on good to soft, which is what we wanted. We’d like ground as it was described at the last Sandown meeting.

Ralph Beckett, trainer of She Is No Lady
The ground is drying up, but we know she likes the track and the trip. It will be tough for her, but it’s a good place to start and she goes there in good shape.

FIRST PUBLISHED 6:00PM, MAY 24 2017
On ratings it looks a very good opportunity for him. He looks very well in himself, and the drying ground will suit