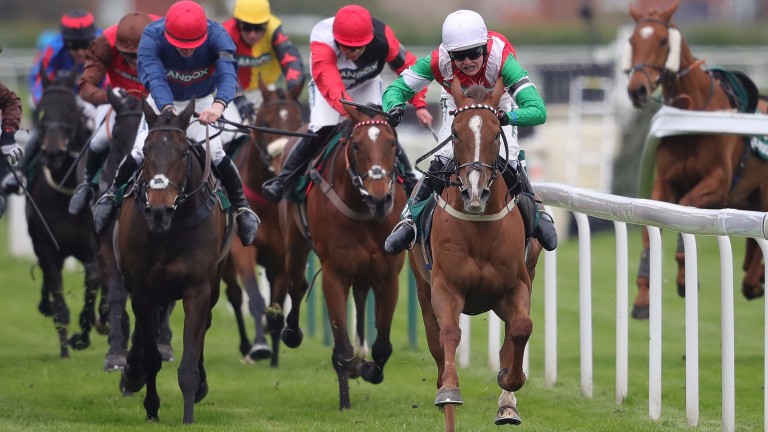 One of jump racing’s most popular veterans Big Fella Thanks has been retired by owner-trainer Tom George after sustaining a leg injury at Cheltenham on Friday evening.

The 15-year-old was attempting to score at Cheltenham’s annual hunter chase meeting for the second year running in what was planned as his swansong outing.

But he was pulled up sharply by trainer's son Noel after jumping the eighth fence in the concluding contest and was later found to have fractured a cannonbone in his foreleg by racecourse veterinary staff.

The trainer confirmed on Saturday that Big Fella Thanks had run his last race.

George said: “He's back home on fairly good terms with himself and comfortable as he's weight-bearing on the leg, so that’s a good sign. He should make a full recovery, fingers crossed.

“The vets at Cheltenham did a fantastic job as they had the leg x-rayed within half an hour of him being brought back in the horse ambulance and he was bandaged up before being back at our yard by 10.30pm.”

Reflecting on the race, George added: “I think he was showing off a bit, jumped the eighth a bit too well and injured himself. But luckily Noel was quick to pull him up before anything more catastrophic could happen.

“It had nothing to do with his age even though this was going to be his last run, as I think Postponed probably picked up the same type of injury. There's no legislating for these things as it can happen to two-year-olds, five-year-olds, ten-year-olds.

“He's been a great servant to our yard and simply loved his racing so there are no regrets about running him on Friday. As long as there are no complications he'll enjoy his retirement and resume his role as my hack.”

Big Fella Thanks had stints with Paul Nicholls when owned by Paul Barber and Harry Findlay, and Ferdy Murphy before joining George. He ran 41 times, earned more than £250,000 in prize-money and posted a combined ten wins under rules and in point-to-points.

He ran in four Grand Nationals, with a fourth behind Don’t Push It in 2010 being his best effort, while his most prestigious victory came in the Grade 3 Greatwood Gold Cup at Newbury the same year. Only last month he was a courageous third to Dineur in the Foxhunters’ Chase at Aintree.

BIG FELLA THANKS IN NUMBERS

FIRST PUBLISHED 4:26PM, MAY 6 2017
He is back home on fairly good terms with himself and comfortable