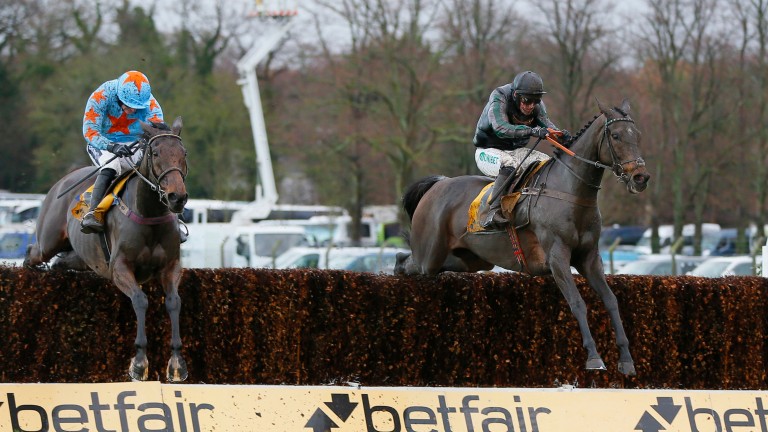 Nicky Henderson and Colin Tizzard expressed their surprise on Monday as Altior and Fox Norton were joined by just Un De Sceaux and Diego Du Charmil as the only four to survive the forfeit stage for Saturday's Grade 1 Matchbook Clarence House Chase.

There were nine entries initially for this weekend's highlight at Ascot, but the race is guaranteed to have its smallest field since its status was upped to the top level in 2008, having been run as a Grade 2 limited handicap before that.

Although shocked to be informed the sport's biggest star would face a maximum three opponents in the £150,000 contest, Henderson was far from disappointed to hear it, given Altior ran twice in December, in contrast to last season, when he went to the Cheltenham Festival off the back of just one run.

Henderson said: "We'll be going one-two-three quite quickly, which was the plan this season as there's nothing much else apart from the Game Spirit, so to that end a very small field this weekend is not bad news.

"I thought we could do this as it's a Grade 1, and then he's got a nice break until Cheltenham.

"He doesn't need a race, it's just he's there for racing, and there's a Grade 1 race there."

Tizzard was also taken aback when informed there were just four in the race – and he pointed out there could be only three.

"Fox Norton is entered for a reason and he's ready to run, but we'll take a view on the ground later this week," he said. "If Ascot gets some rain and it's good ground we'll run, but if they don't we may have to wait.

"Let's not underestimate the horse, we want to get going and run in all the big races but we'll be careful with the ground at Ascot as the home straight, in particular, has been a bit dry.

"He still works like a proper horse and he could maybe run again in February before going to all three spring festivals. I think he's more of a two-miler, but Joe [Tizzard] wanted us to keep the option of the Ryanair in case he's lost a yard of pace in the time he's been off."

He said on Monday: "Our fella is fit and well and I'm very happy with him. We're keeping one eye on the weather and seeing what way the ground is, but given the way the contest has cut up, I'd definitely say I'm more inclined to run than not run at this stage."

The last edition of the race as a limited handicap, in 2006 – the weather claimed the race in 2007 – contained ten runners, since when there have been only single-figure fields, with eight of the previous 11 races featuring an odds-on favourite.

Asked whether Ascot would consider reverting the race to limited handicap status, director of communications Nick Smith said: "The bottom line is the pool of horses just isn't there at the moment and small fields are very common in conditions races – over jumps especially.

"If we went back to being a limited handicap we wouldn't have the likes of Altior and Un De Sceaux; the good horses don't run in handicaps like they used to.

"We could probably guarantee a bigger field but wouldn't have the best two-mile chaser in the world taking on the three-time defending champion.

"There's no standout in the three-mile hurdling division at the moment and we had 11 runners in the Long Walk, but Altior is such a completely dominant force that he scares some horses off.

"Ideally we'd want him and Un De Sceaux in a field of eight or ten, but we understand horses like that will always mean less opposition, that's completely understandable."

Smith added: "We run the Hurst Park Chase, which is the highest value two-mile handicap chase in the calendar, but if an outstanding champion ran in the race – which is its raison d'etre – they would still scare away the opposition, as happened when Altior had to give weight away in the Game Spirit last year, so the two races serve different purposes."

Asked for his thoughts on whether the race would be better reverting to a limited handicap, Henderson replied: "I'm sure there would be 20 runners, but as it's like this now, and I'm lucky enough to have a horse like Altior, we've got to try to win it.

"I remember the debate in the old days and one of the great renewals was when Isio, who was a lovely little horse we had, had the most fantastic race with Azertyuiop and we were getting a stone and a half.

"It was the most brilliant race, a really memorable race. Maybe we'll have a great race on Saturday, I don't know."

In many ways Ascot finds itself in a difficult position. We want to see the likes of Altior and Un De Sceaux take each other on, but we also want decent field sizes and competitive betting markets.

Graded handicaps are a potential solution to both problems, and the prospect of seeing Altior trying to give 7lb to Un De Sceaux, 8lb to Fox Norton and a stone and a half to Diego Du Charmil – and a handful of others – whets the appetite.

It is also hard to categorically say good horses simply would not run in such races. Desert Orchid, Waterloo Boy, Viking Flagship, Martha's Son, Call Equiname, Azertyoiup and Well Chief – all of whom feature in our 50 greatest two-mile chasers list – ran in the race when it was a handicap, and it comes down to a combination of opportunity and incentive.

There are more opportunities now, but Australia's plethora of mega-money Group 1 handicaps have no problem attracting stacked fields and if, instead of two races, Ascot ran one £275,000 graded handicap perhaps it would be enough to tempt connections of a horse like Altior into trying to concede weight.

Such a contest would go a long way towards paying for itself through vastly increased betting turnover.
Stuart Riley

FIRST PUBLISHED 1:30PM, JAN 14 2019
The present plan is for Un De Sceaux to run but we'll be keeping an eye on the weather during the week