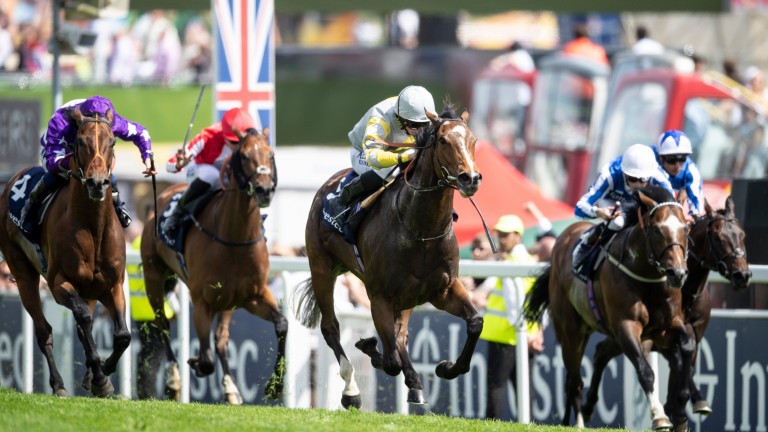 Epsom's Diomed Stakes has been moved to Newbury as part of the changes to June's race programme
Edward Whitaker
1 of 1
By Bill Barber UPDATED 8:44AM, MAY 26 2020

BHA officials have conceded there may be frustration for connections hoping to run their horses when racing resumes but have promised to do all they can to get them back on a racecourse.

A number of Pattern races have also been saved given the number of opportunities lost to the Classic generation, which in turn have helped strengthen the weekend cards next month which are expected to be broadcast by ITV.

Having already released details for the first eight days of the racing schedule after the planned resumption on June 1, as well as the running order for Royal Ascot, the governing body on Monday published the remainder of the provisional race programme for June.

Having prioritised two-year-old races in the first week following resumption to give opportunities for juveniles that might compete at Royal Ascot, the focus for the rest of June will be on maidens and novice events for three-year-olds.

BHA chief operating officer Richard Wayman said work had been going on "almost around the clock" to try and best adapt the existing race programme to the reduced fixture list.

He added: "When racing resumes we know there will be a lot of horses waiting to run and at the same time we will only be staging three fixtures every day once we get through those first few days.

"We are very conscious that there will be some frustration that people are going to find it difficult on some occasions to get a run."

Wayman said measures such as extending the number of races at a meeting to nine or ten and changing the way some handicaps are framed had been implemented to try and cater for that demand.

He went on: "Even with those measures we are still clear that it will be challenging for some horses and particularly for the most lowly-rated.

"Horses rated in the 40s and below are going to find it quite difficult to get on the track in the first few weeks but we will be doing all we can to increase the number of opportunities to try and provide more places for horses to run.

"We are very sensitive to it and we want to do our best to help horses get on the track."

Among the changes made to the traditional programme on the weekend of June 13 and 14 are the transfer of Epsom's Group 3 Diomed Stakes to Newbury on a card which also includes the Listed Abingdon Stakes for three-year-old fillies and the Maggie Dickson Stakes, a Listed race for fillies and mares moved from Musselburgh.

On the following day Goodwood will stage the Listed Cocked Hat Stakes for three-year-old colts and geldings, which normally takes place at the course in May.

The BHA's director of international racing and racing development Ruth Quinn, who has been heading up work on the Pattern, said: "We are trying to give ITV a good quality card for both the Saturday and the Sunday and fill in a few more gaps along the way.

"We are just very conscious of how many opportunities the nice three-year-old has lost. The horses that are aiming towards the Derby and Oaks have lost a wealth of opportunities and even if they end up not being forward enough or good enough to end up at Epsom they may well turn out to be a very, very good autumn horse.

"We still have that responsibility to try and further their education as much as possible."

Other races rescued for the Classic generation include the Listed Fairway Stakes which will now be staged at Newmarket on June 27, the same day as Newcastle's Northumberland Plate meeting.

The Listed Carnarvon Stakes for three-year-old sprinters normally run at Newbury will now take place at Windsor on June 28.

FIRST PUBLISHED 7:39PM, MAY 25 2020
We will be doing all we can to increase the number of opportunities to try and provide more places for horses to run